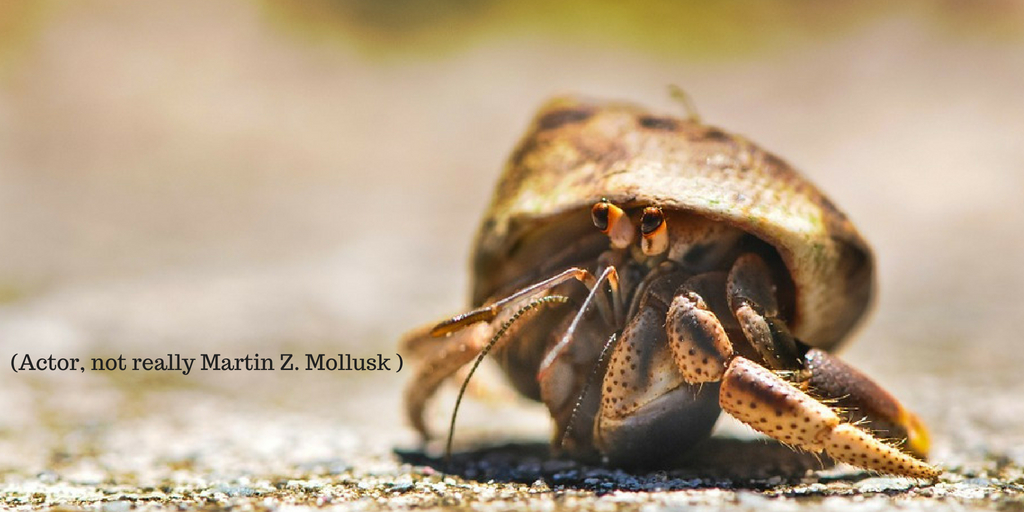 Martin is a crafty crustacean who has garnered celebrity status from throngs of adoring fans who lined the beach next to the Music Pier last weekend just for a chance to see the guy and learn when summer will truly begin. He was carried down to the beach on the shoulders of former Eagles long-snapper Jon Dorenbos amid much pomp and circumstance. A chorus of children serenaded him and a few kids were even honored for their inspiring artwork as a gigantic inflatable hermit crab danced in the spring breeze. Several crab fishing vessels were lured to the offshore, until they learned it was nothing but a fake decoy.

Each year, Martin Z. Mollusk day begins when he wakes up from hibernation and makes his way to the beach. It once took him weeks to emerge from his covered crab cage in a boarded-up boardwalk store, until fans became so bored themselves waiting for him to arrive on his own, that they found a local celebrity to hasten the event by carrying him down to the beach. Cue: Dorenbos.

The idea behind Martin Z. Mollusk Day is that if the dashing decapod sees his shadow, summer will come a week early. If he doesn’t see his shadow, it is believed by those who follow shore folklore that summer will come a week later when the town mayor brings his or her oversized key to the beach and, in another act of pomp and circumstance, unlocks the ocean. Either way, summer will officially come on June 21, weeks after Memorial Day ushers in the unofficial beginning of summer at the shore. If you are confused by all this start-of- summer talk, don’t be – you’ll know it’s summer when it takes you 35 hours to drive to the shore from Philly. One way.

Oh, and by the way, Martin K. Mollusk saw his shadow. Which means summer starts this weekend. I think. If you want to know what’s going on down the shore for the unofficial new start of summer on May 18, 2018, look for my next blog post, “Spring has Sprung at the Shore!”. Which, come to think of it, should possibly be changed to “Summer (?) Has Sprung at the Shore!”

Either way, enjoy your weekend!