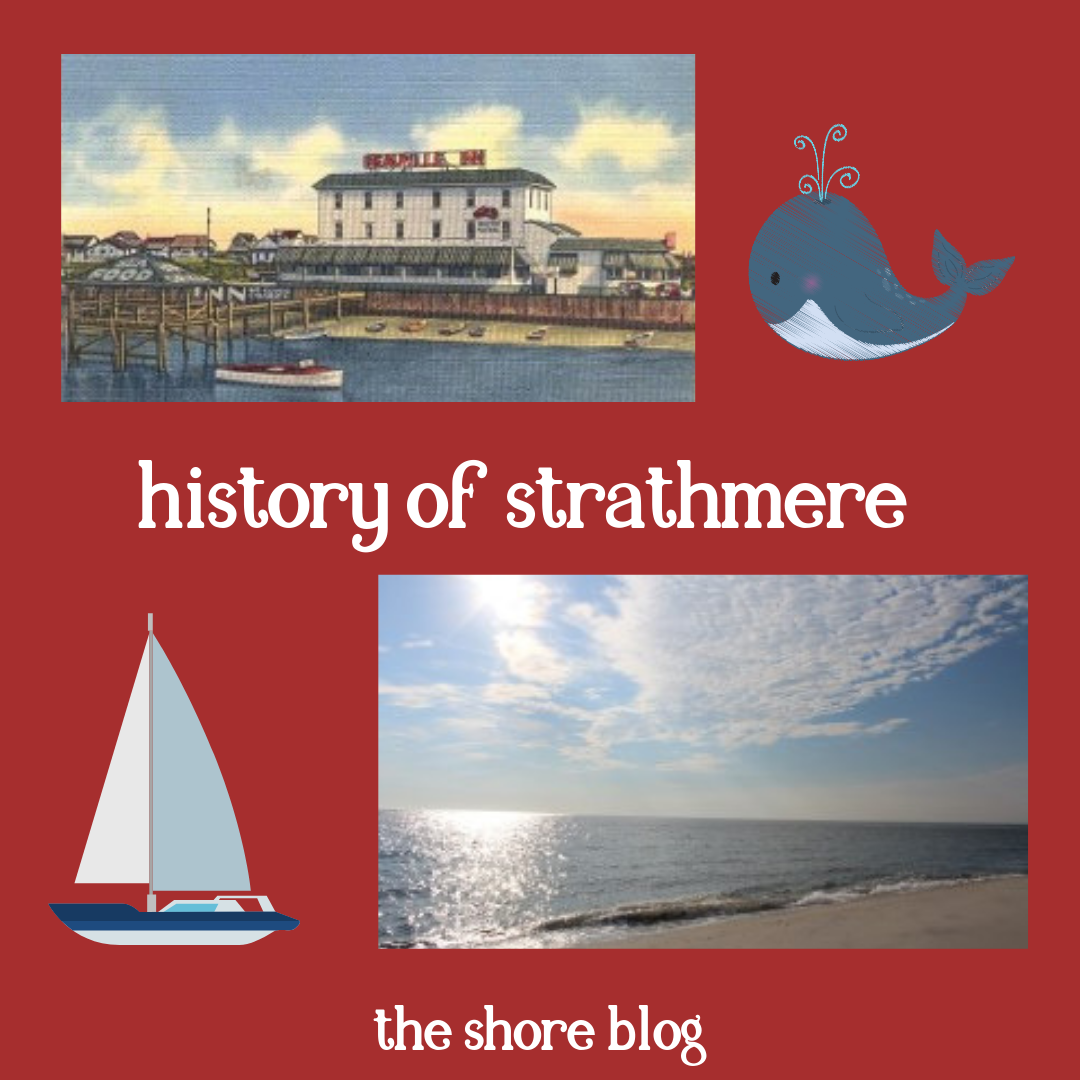 Strathmere has an interesting history. For over 2000 years the Leni-Lenape Indians lived in the area that would later become New Jersey. They came to the coast to fish and gather quahog shells, from which they “wampum” , or currency.

In 1692, Joseph Ludlam bought the land on which Strathmere, Sea Isle City and Townsends Inlet now reside and named the island after himself. Ludlam used the island to stock cattle and sheep, and mainlanders would visit to hunt, fish and engage in other recreational activities. No permanent settlements would be established on the island for nearly two centuries. It is believed that pirates would stop at the island while sailing up the Jersey coast during this time, as evidenced by the type of pistols found during those early years. In 1781, “The Fame” shipwrecked off the coast and Spanish coins have been retrieved from the shoreline after dredging activities have occurred in the area.

Charles Kline Landis purchased Ludlam Island in 1880 with the intention of creating a beautiful seaside resort. He renamed the Island “Sea Isle City” and effectively marketed it as both a place to come for a visit and a place in which to live.

The northern tip of the island was named “Corson’s Inlet”. It was named after John and Peter Corson. These men  sailed across the inlet between Ocean City and Strathmere. In 1883, the West Jersey and Seashore Railroad constructed a rail line that came into Corson’s Inlet from Ocean City. The railroad was later acquired by the Reading Railroad and ultimately fell into bankruptcy. 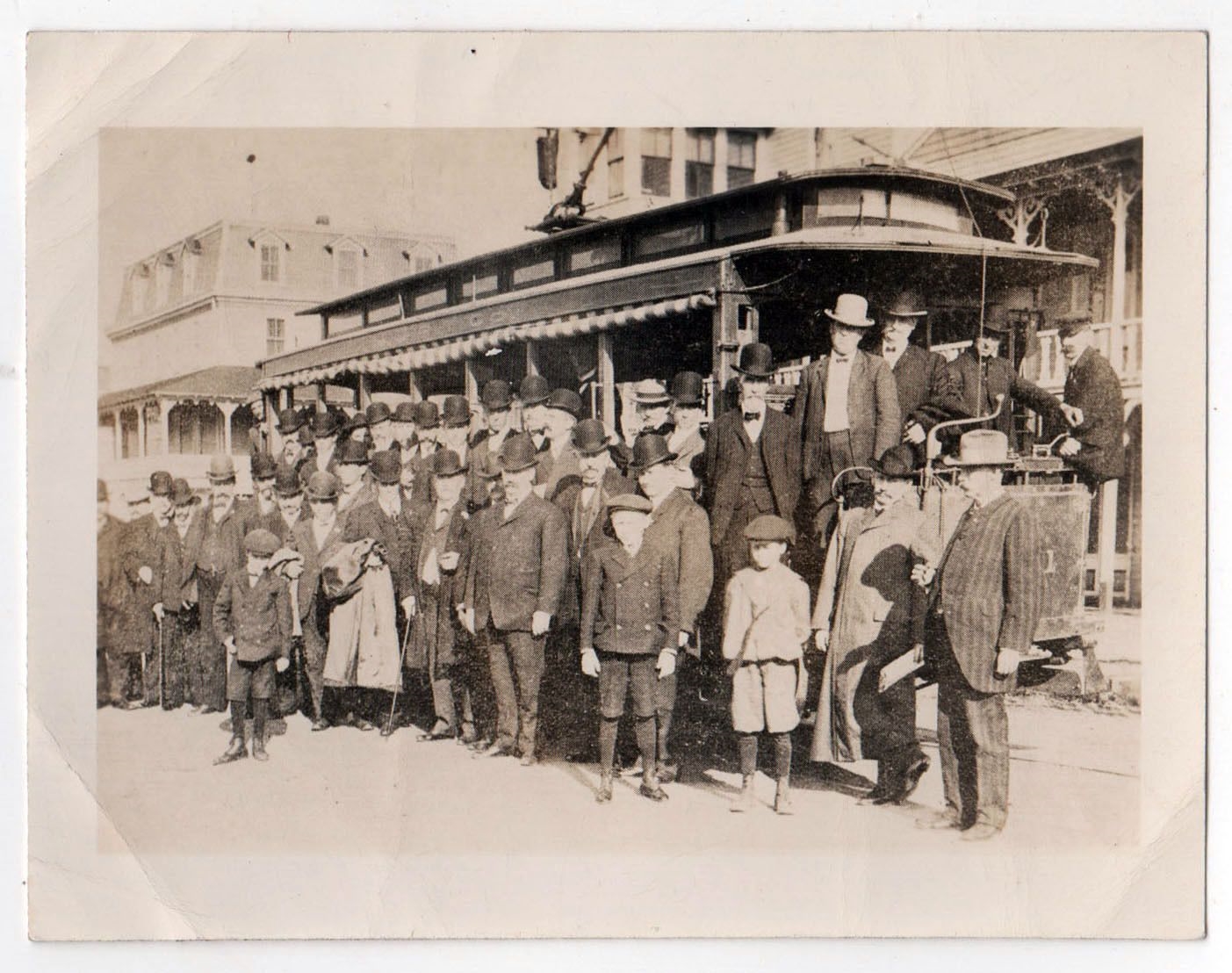 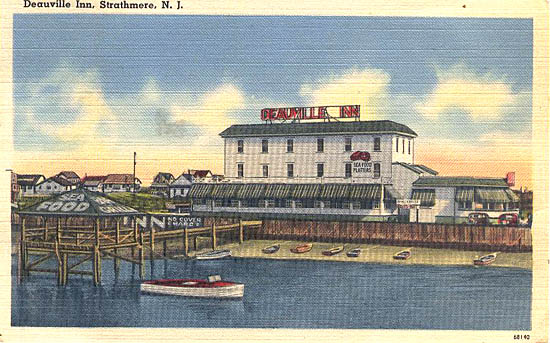 In 1881 the first hotel was constructed using materials that had to be brought in by boat. It was built next to the railway line and was called “Whelen’s Hotel”. Later, it would become the Deauville Inn. The building was used for a variety of purposes throughout the years. These include a speakeasy during Prohibition and a rum-running station. In the 1930’s it was home to a casino, well before gambling was legalized in Atlantic City,  Several famous people have stayed at the Deauville Inn throughout the years. This includes President Theodore Roosevelt. 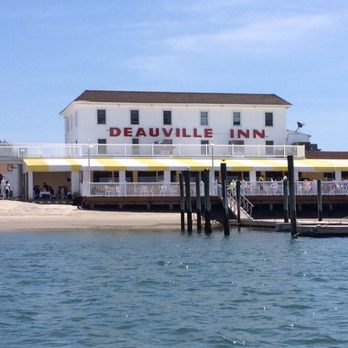 The building suffered damage in both the Great Atlantic Hurricane of 1944. It also suffered damage during the Nor’Easter of 1962. Over the next two decades it ceased operating as a hotel and fell into disrepair. The Carpenter family bought the building in 1980 and worked diligently to restore it. A new owner purchased the building in 2019. They are doing further renovations to the building. The Deauville Inn remains a popular restaurant where people flock in the summer to enjoy dinner and a sunset over the bay.

Many families once flocked to the beach in the summertime, especially on Sundays. The fare was $1 for a round-trip. They would often bring their lunches in shoe boxes, which gave rise to the term “Shoobies”. It originated as a derogatory term for two reasons. First, the shoe box-toting visitors brought their lunches so that they wouldn’t have to buy food. This deprived local establishment owners of revenue. Second, these inland visitors were not always accustomed to the environment. This includes the dangers of the ocean. They were unfamiliar with beach etiquette and other local customs. Therefore, they were looked down upon by residents. Today, the term “Shoobie” is still used to describe someone who visits (but doesn’t live in) the coastal towns of South Jersey.

Strathmere was once home to one of two U.S. Lifesaving Stations that resided on Ludlam’s Island. The other station was located in Townsends Inlet. The U.S. Lifesaving Service was created in 1871. Over 200 stations were built along the east and west coast and the Great Lakes to provide search and rescue. When the U.S. Coast Guard was created in 1915 , it began moving stations from the oceanfront to the bayside. This was done to assist in serving those waterways. It also allowed for the launching of bigger boats. A station that was originally at 58th Street in Ocean City station was moved to Corson’s Inlet in 1958. It served the area until 1964.

A hotel by the name of the ‘West Jersey Cottage’ was also built next to the train station in 1895. First, the hotel housed fishermen and some year-round residents. Next, it was home to soldiers who patrolled the coast during World War I. The hotel was badly damaged in the Great Atlantic Hurricane of 1944. Part of the hotel was salvaged and moved to the main intersection in town. Today it is a privately owned home.

In 1905, Corson’s Inlet was annexed to Upper Township from Sea Isle City to help reduce the city’s debts. A contest was held 7 years later to rename Corson’s Inlet. This is how Strathmere got its name. Strathmere means “strand by the sea”. Further south along the strand is an area known as “Whale Beach”. This area was named for the  many whales that have beached in this area. 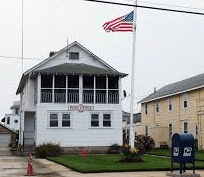 The first general store and a post office were constructed in 1909. The general store no longer exists. However, the post office and some other commercial establishments still operate today as they did back then.

A single-family home was constructed in 1920 and later became the Strathmere Hotel. For years it served as the only overnight lodging establishment but no longer operates. 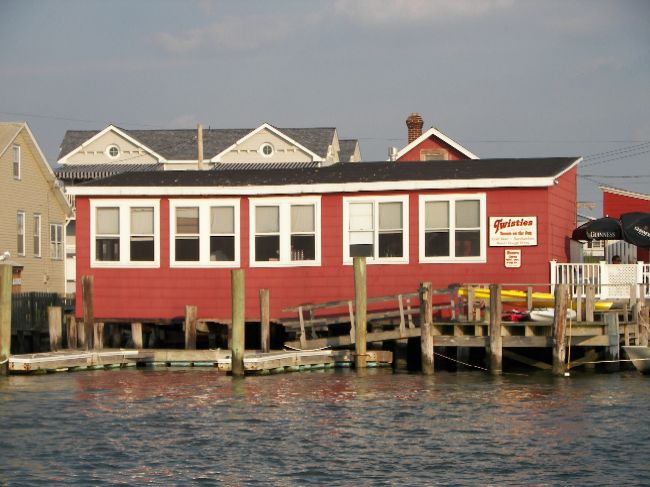 Twisties Tavern on the Bay began as a speakeasy during Prohibition. It became a restaurant in the 1950s that continues to serve patrons. The inside of the restaurant remains largely unchanged, according to its longtime customers. A restaurant by the name of Mildred’s was established in the same era but was recently closed. This was to the dismay of its many loyal customers.

Storms of the Past

Strathmere remains less developed than many of its beach town neighbors despite many building plan proposals in the 19th and 20th centuries. The town is vulnerable to storm damage due to the fact that it is only two blocks wide. It is flanked by the ocean on the east, the bay on the west and the inlet on the north. The 1944 hurricane, the 1962 nor’easter and other storms  have changed the town’s landscape and development. These storms destroyed homes and businesses. However, they did not crush its spirit. In fact, its sense of community – and fortunately a high, healthy dune line – has grown in the place where Mother Nature waged some of her most vicious coastal attacks. 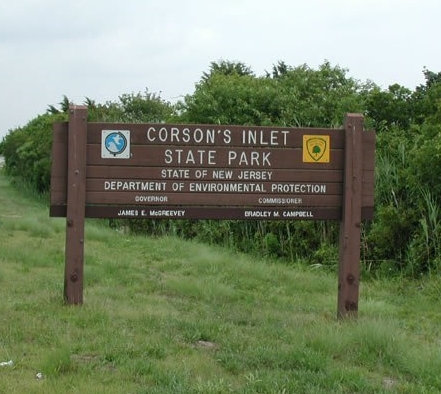 Another factor in reducing development was the creation of Corson’s Inlet State Park in 1969 to help protect and preserve this area, which is one of the last undeveloped tracts of land along the coast. The sand dune and marine estuary ecosystems here are home to hundreds of species of wildlife who have made permanent or migratory homes here. Today, many visitors pass through the dune trail to beachcomb and fish. Boaters dock at the beach along the inlet to enjoy picnics and, at low tide, sandbars are formed where people can walk out and wade in the receding water.

In 2007, a group called the Citizens for Strathmere and Whale Beach petitioned for de-annexation from Upper Township to allow Strathmere to become part of Sea Isle city, claiming a lack of adequate services from Upper Township and a possible reduction in property taxes by 40-50 percent if it annexed to Sea Isle City. After a seven year legal battle, the New Jersey Supreme Court denied the appeal, deciding that de-annexation would cause significant injury to the well-being of Upper Township as a result of the loss of revenues to the school district and would cause a tax increase for the citizens of Upper Township if it were to lose revenue from its upscale residential beachfront community. So, while Strathmere looks as if it’s a part of Sea Isle, it legally isn’t.

Being in Strathmere today is like stepping back in time. Described as being “quirky…and low key”, you may still think you’re back in 1950’s small town America, that is if you can look past some of the newer more modern homes and “McMansions” that have gone up over the years. There is a fire house, a library and a post office but no mail delivery service. Residents have to go pick up their mail, but that gives them the chance to see and stay in touch with one another. There is an active Improvement Association that shares news, hosts events and keeps the feeling of community alive.

Note: The information contained within this historical account has been gleaned from various resources. If you notice any inaccuracies, please do not hesitate to reach out to us so that we may correct the information. If you wish to learn more about Strathmere’s history, please visit Strathmere’s webpage. Their site offers an excellent resource to learn more about this history of Strathmere.

To learn more about Strathmere, please follow the links below:

Back to Strathmere’s Main Page

Where to Eat in Strathmere

Where to Stay in Strathmere 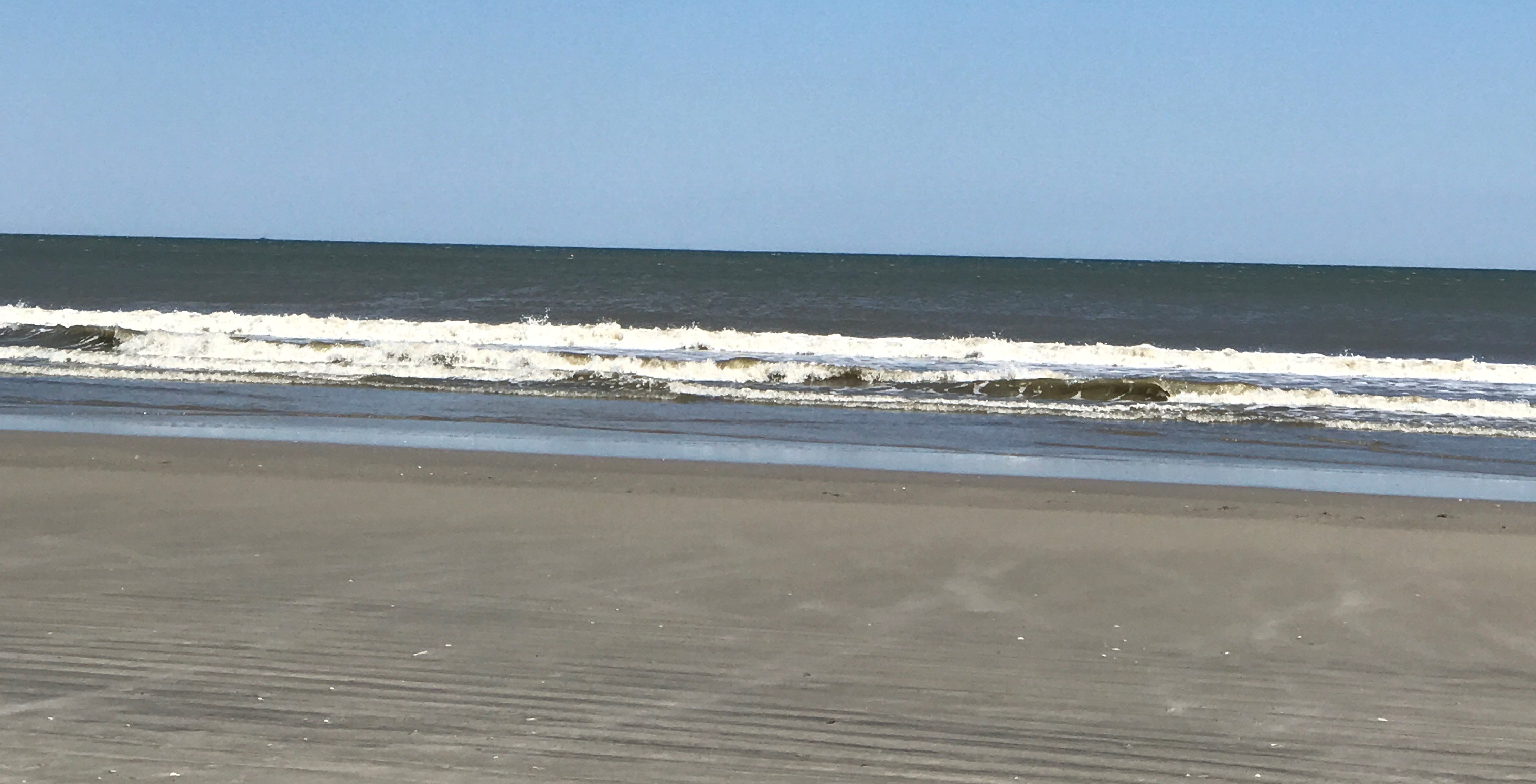 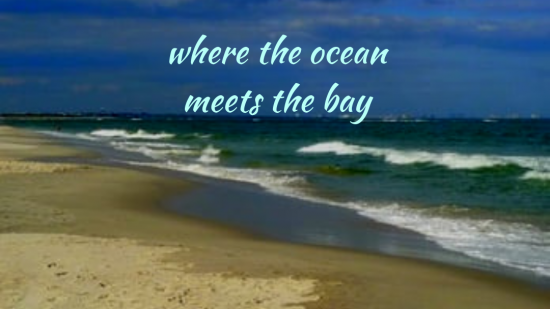 Where The Ocean Meets the Bay