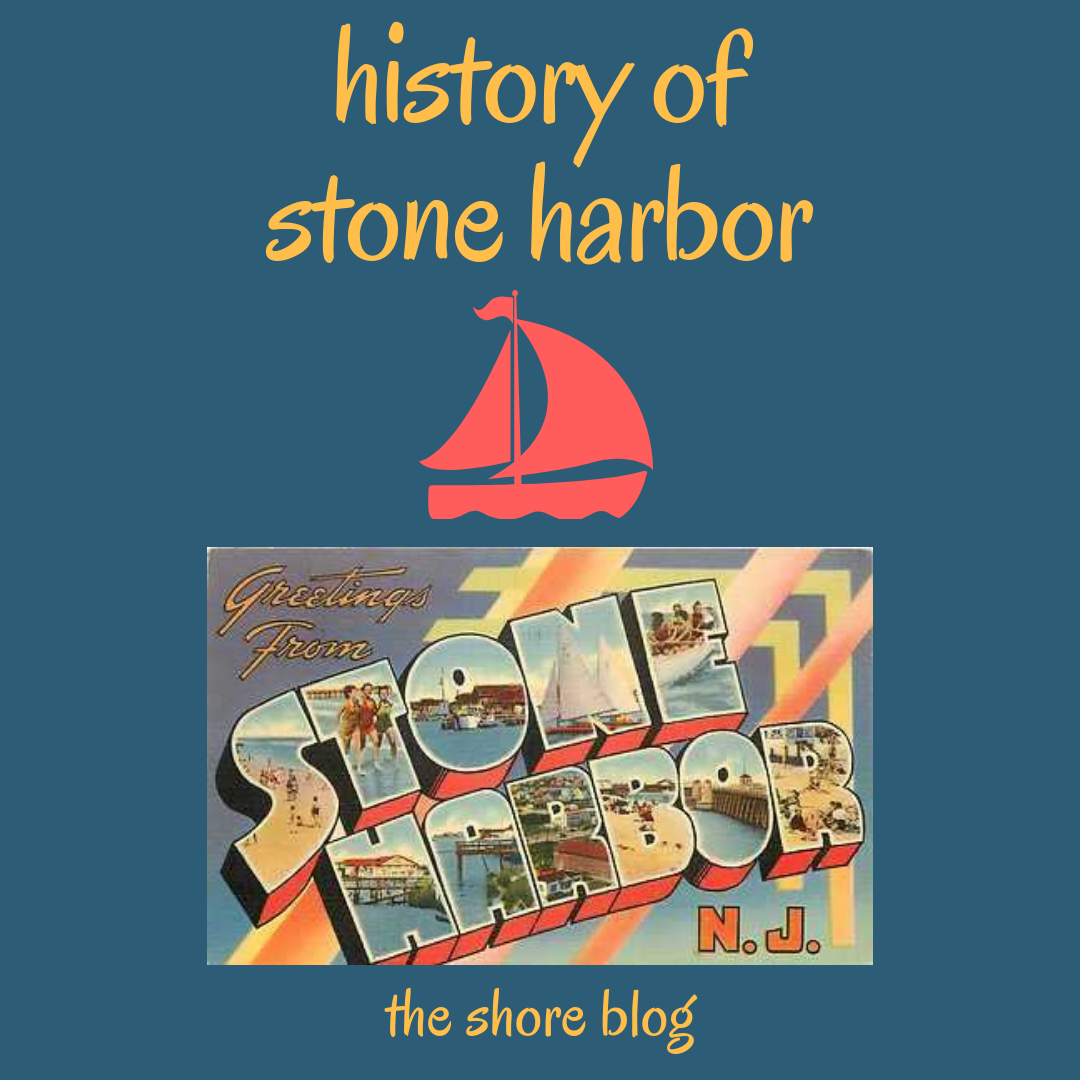 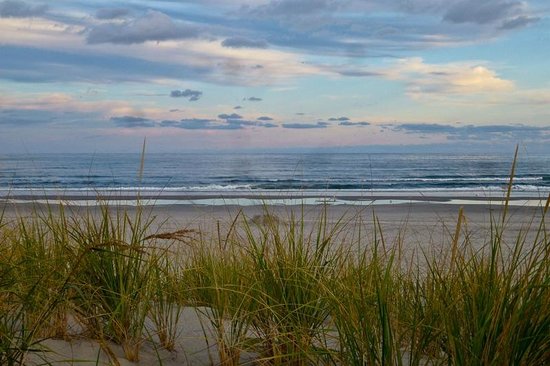 The barrier island on which Stone Harbor is located was once a juniper forest occupied by the Leni-Lenape Indians. In 1722, the 2725-acre island was purchased for the equivalent of $380 by Aaron Leaming who thereafter named it Leaming’s Island. The Leaming family owned the island for approximately 100 years, during which time it was used as a cattle range and a source of timber. The island was sold by the Leamings, passed through several different owners and finally renamed “Seven Mile Island”. 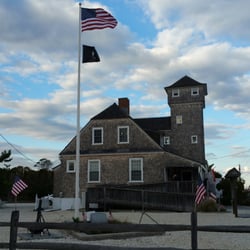 Atlantic coast to assist swimmers and shipwreck survivors. The U.S. Coast Guard Station #35, known as Tatham’s Life Saving Station, was built in 1895 on what would later become 2nd Avenue in Stone Harbor. In 2008 the building, which still exists, was added to the National Register of Historic Places. Today it serves as an American Legion Post and museum where war memorabilia and maritime artifacts are displayed.

In 1887 the island was purchased by the Seven Mile Beach Company with the intention of creating a seaside resort. The developers referred to it as the “Jewel of the Jersey Coast” when promoting the island to prospective, wealthy visitors. 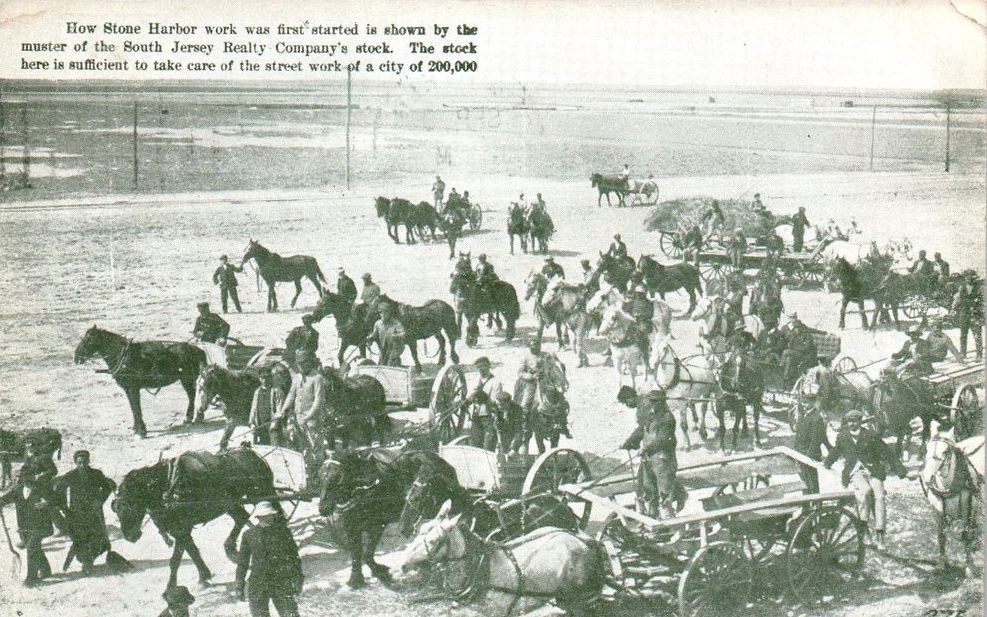 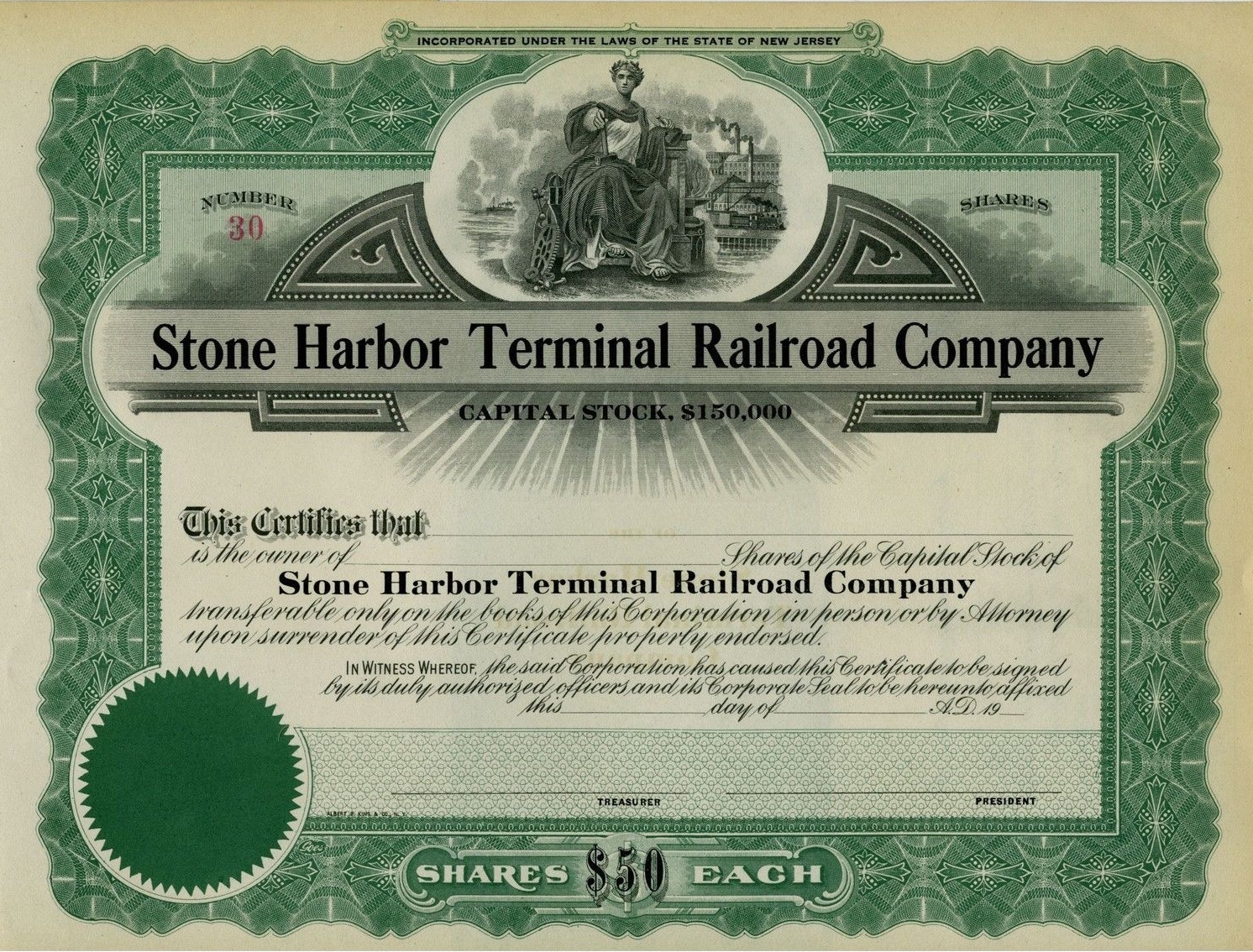 Two years later, the company gave permission to the West Jersey Railroad Company to build tracks to run the length of the island, joining up with tracks that already ran from Philadelphia to Ludlam’s Island. To allow trains to continue south onto Seven Mile Island, a newly constructed railroad bridge had to be built across Townsends Inlet.

Once the bridge was completed, the tracks ran 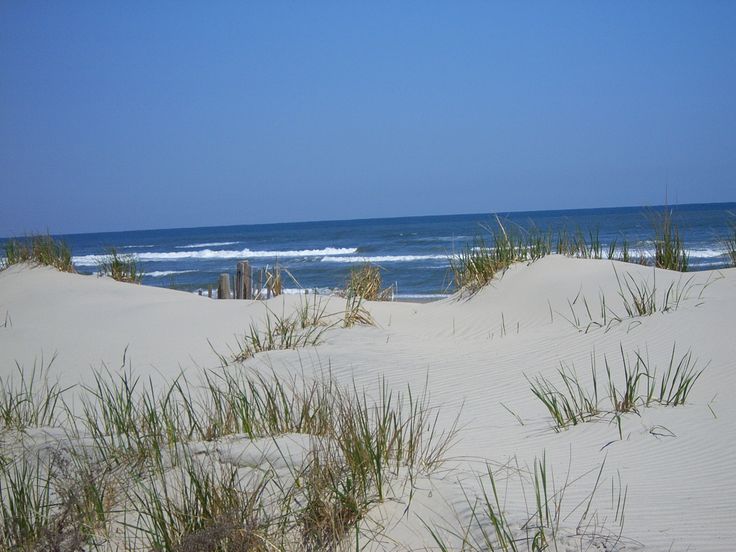 to 37th Street in Avalon but stopped because, beyond that point, the remaining island terrain consisted of only sand dunes and maritime forest lands.

In 1891 a development company bought the land south of Avalon. They named it Stone Harbor after a mariner named Captain Stone sought harbor here during a storm.

The first residential building was constructed in 1892, a five-story hotel called the Abbotsford Inn. It was located near 80th Street. Shortly thereafter seven cottages were constructed from 80th to 83rd Streets. 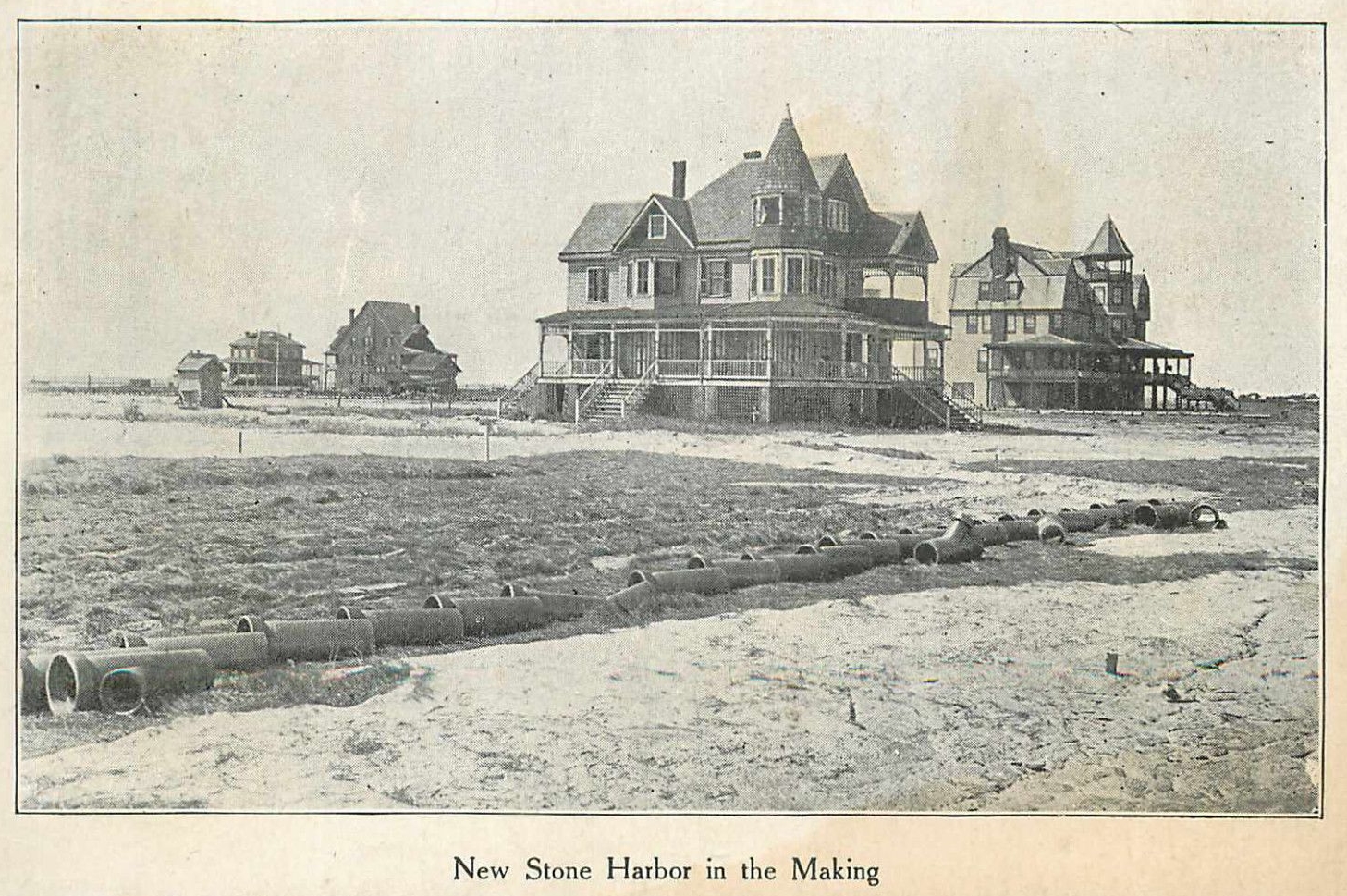 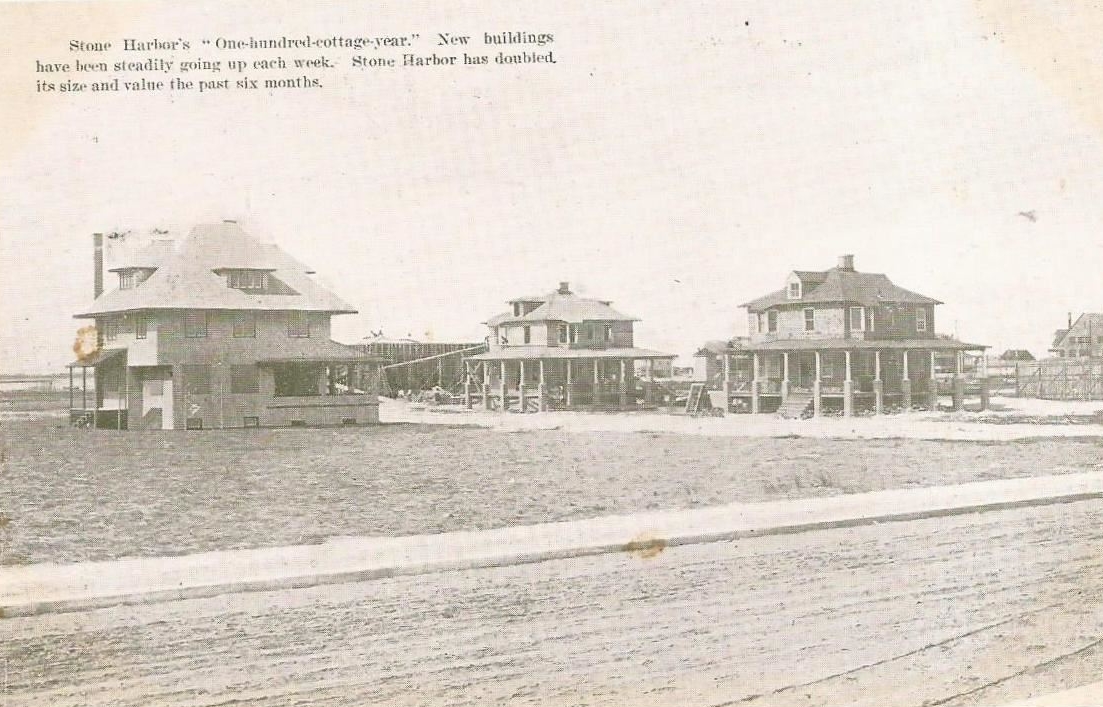 In 1907, the sand dunes that surrounded the newly developing community of Stone Harbor were levelled off, marshes were filled in and streets were paved. Dune Drive, which ran along the coast on the eastern side of the island starting in Avalon, was eventually extended and renamed “Second Avenue” at the border of Stone Harbor. 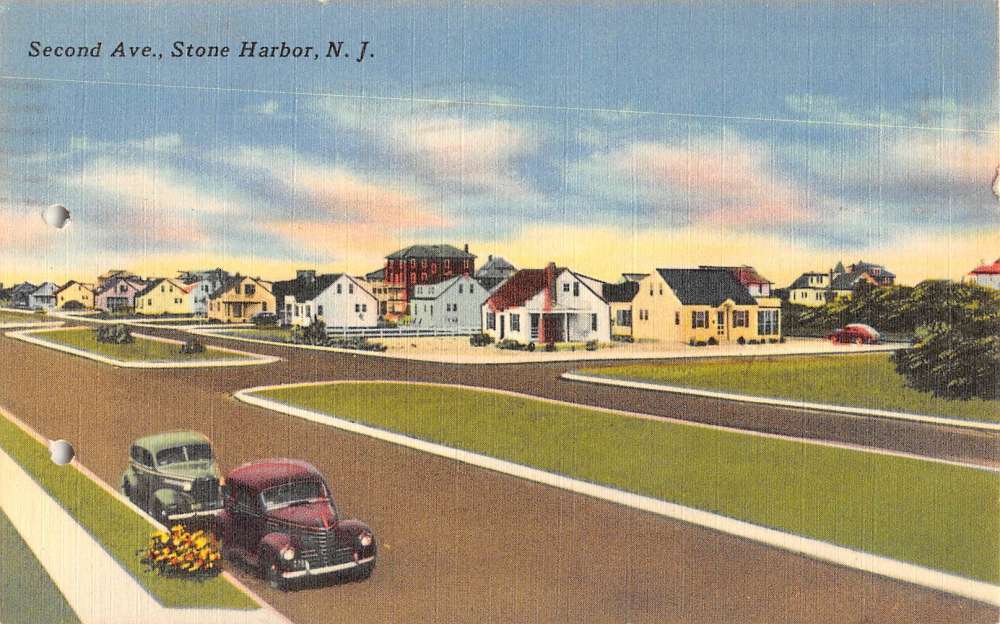 In 1910, a series of beach bungalows were built 109th to 111th Streets between 2nd and 3rdAvenues – this area became known as the “Bungalow Colony”. 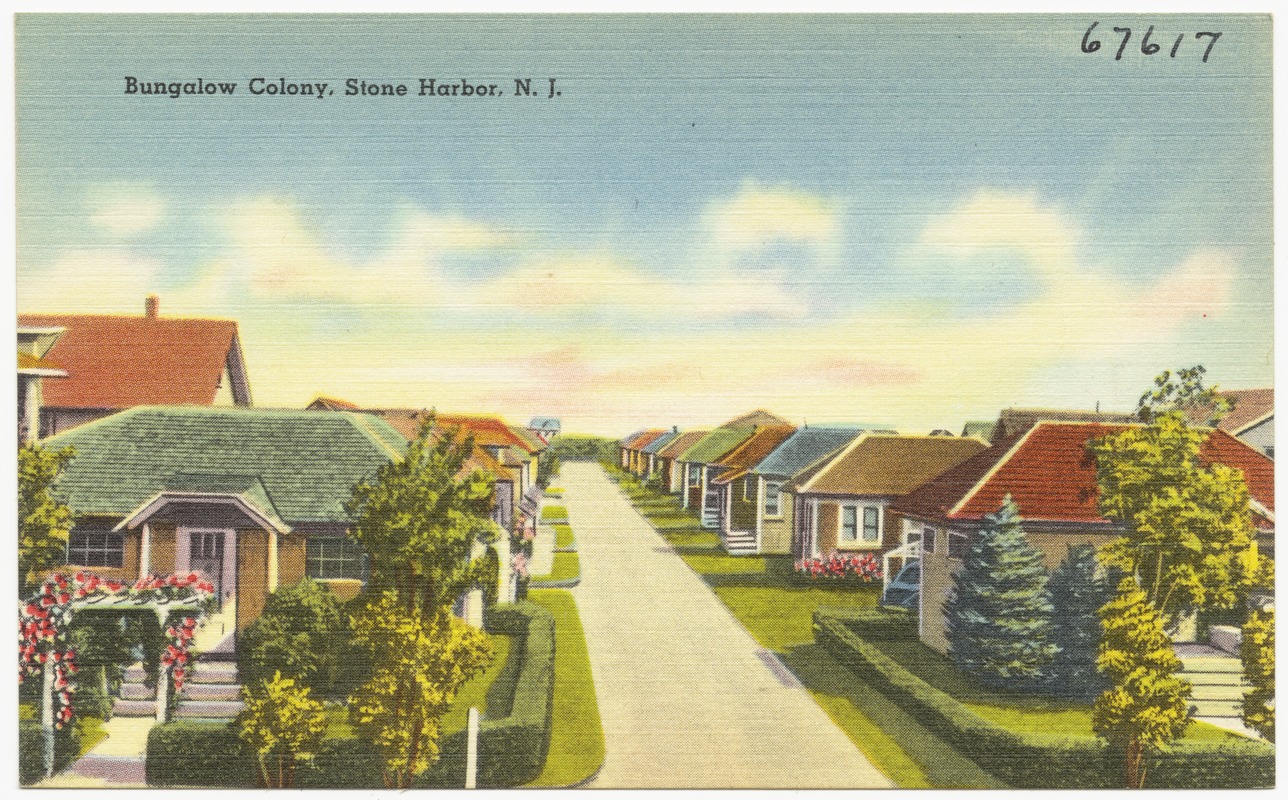 The railroad was the primary mode of transportation for visitors to the island until roadways were constructed in the early 1900s. However, in 1911 it is said that then-Governor of New Jersey, Woodrow Wilson, drove the first spike in the railroad connection that was being built between Cape May Courthouse and Stone Harbor – two years before he would become a two-term President. The railroad was completed in 1912, but not before a highway at 96th Street opened, allowing visitors to arrive on the island by way of automobile. 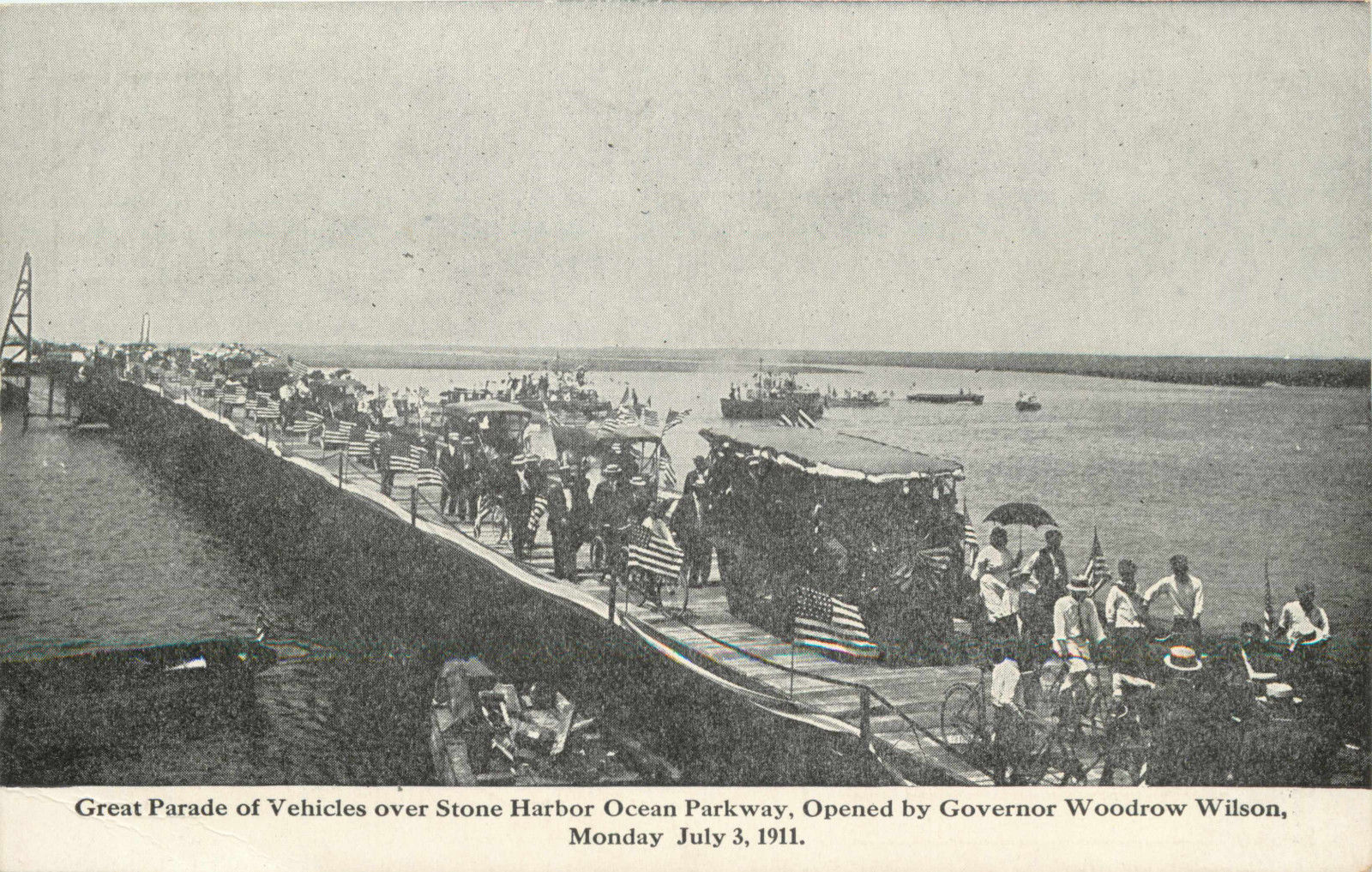 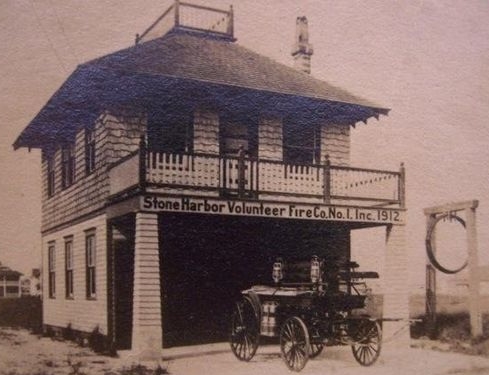 The year of 1912 was important in Stone Harbor’s history as it was when many firsts occurred in the growing community. The first lifeguard and first police man were hired and the first volunteer fire department formed.

The original Shelter Haven Hotel was built at southwest corner of 96th, and it was the first time that coastal air mail delivery was made by a Wright Brothers plane when mail was flown between Ocean City and Stone Harbor. The town saw many advancements in growth during these years, and by 1914 it was incorporated as a borough. 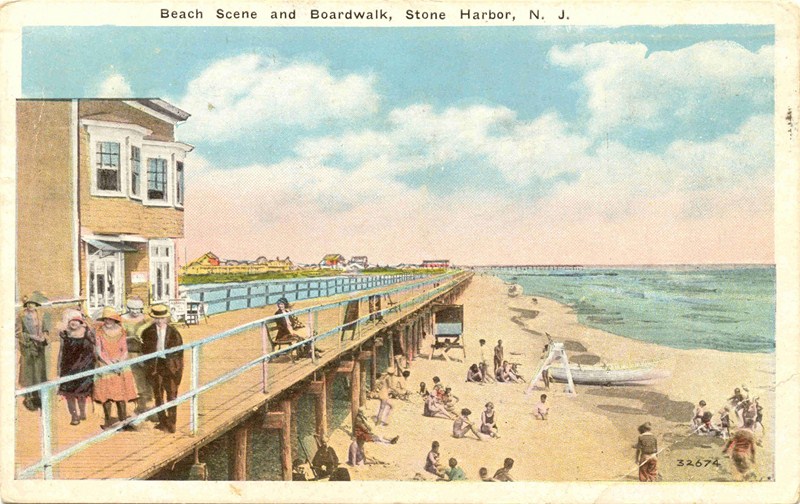 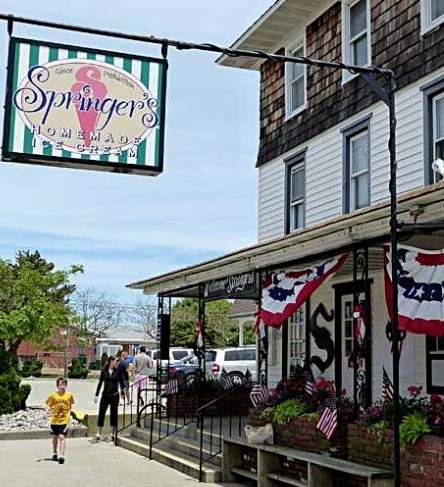 Within the next few years, a boardwalk was constructed with a theater and motion picture building, as well as a fishing pier at 106th Street. However, both of these structures, along with several beachfront homes, were destroyed in the Great Atlantic Hurricane of 1944. In 1920, Springer’s began a tradition of delighting families with its famous homemade ice cream, a tradition that continues today. 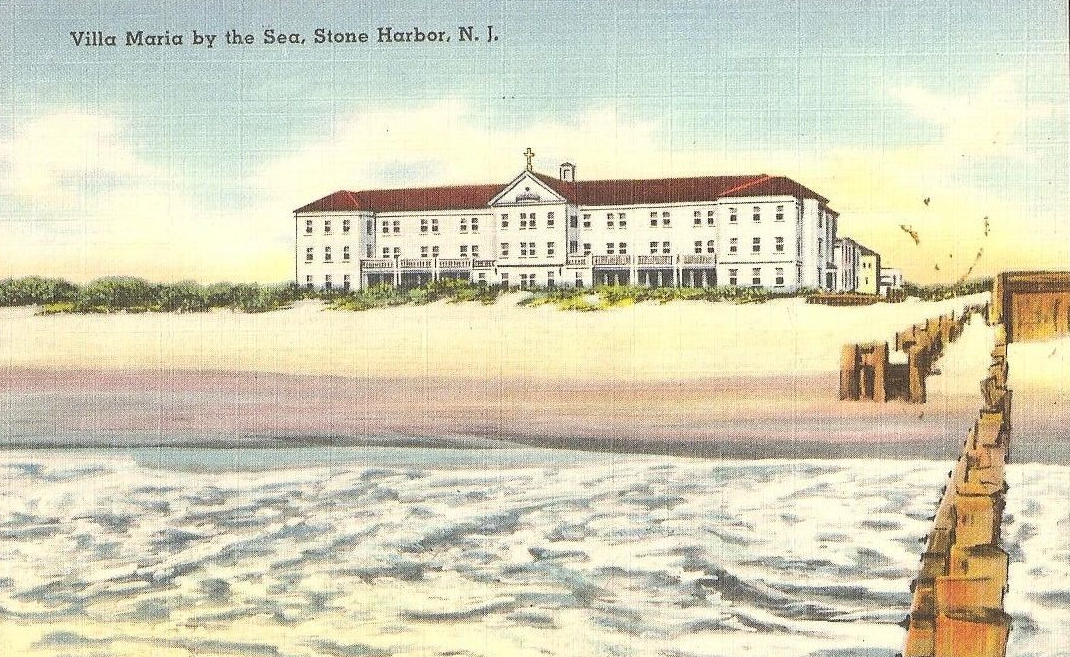 In 1937, Villa Maria By the Sea Convent opened a summer retreat home for the sisters of Immaculate Heart of Mary Congregation at 111th Street. The huge building faced a beautiful stretch of private beach. Years ago, noting that it would be a perfect surfing location, some local surfers approached the nuns and respectfully requested to use the beach for surfing. Since the nuns only used it for a couple hours each afternoon, they readily agreed. Today, it is known as “Nun’s Beach”. 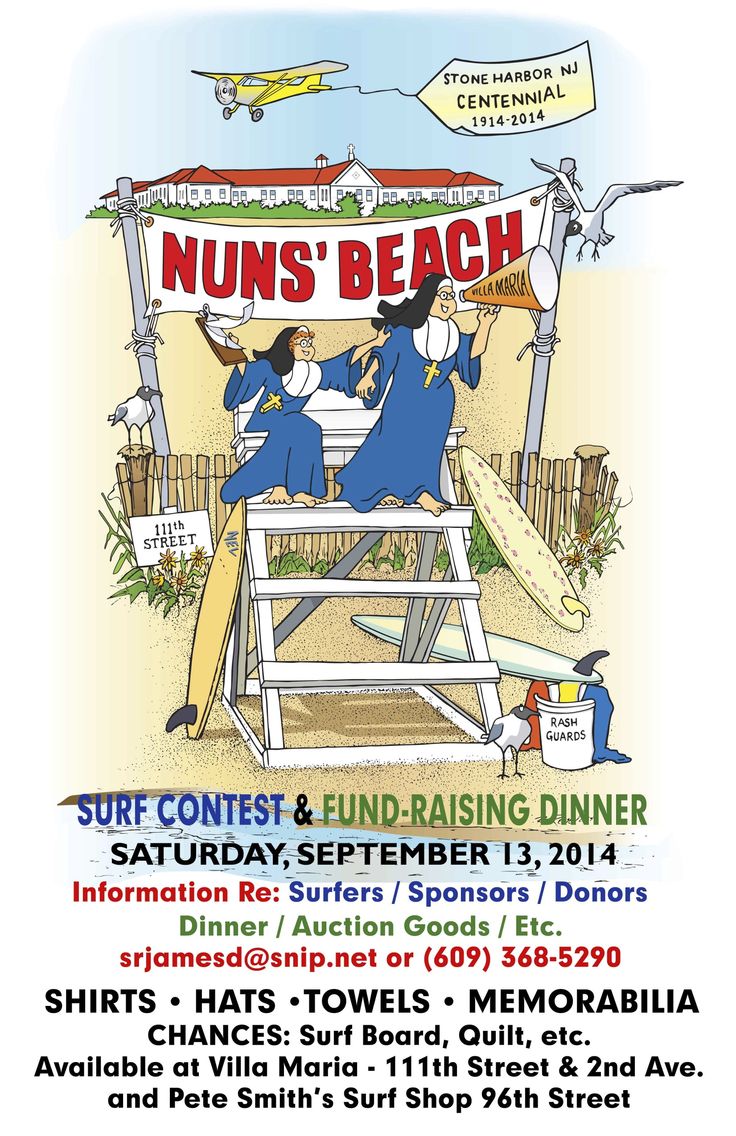 In 1996, the surfers organized a surfing competition as a way to thank the Sisters for their generous use of their beach and to raise funds for the religious summer retreat. The competition, which is held each September, became so popular that its original purpose as a small-town event was lost. Now the event is by invitation only with some spots reserved for newcomers. It is a day-long event with concession stands selling food, drinks and merchandise and a dinner follows the day’s events. Each summer a new Nun’s Beach tee shirt is designed and sold. The motto of the event is “Pray for Surf”.

The Stone Harbor Bird Sanctuary, a 21.5-acre nature preserve where birds of many species can feed and nest, was established in 1947. The area is registered as a National Landmark by the National Park Service.

In 1969, the Wetlands Institute was established. In addition to educational exhibits, classes and tours, the Institute includes more 6,000 acres of natural wetlands with a trail and observation deck. 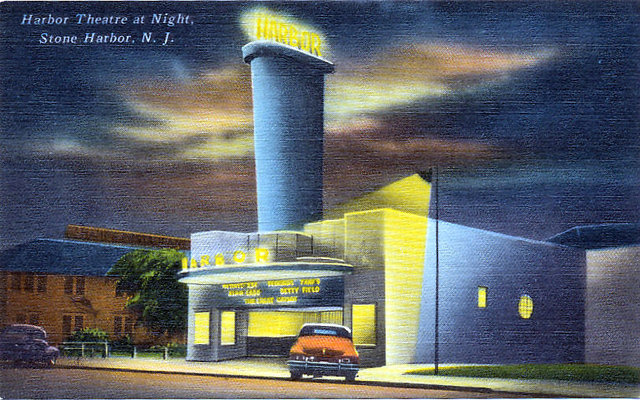 In the 1940s, the Harbor Theater was built on 96th Street. It was renovated and reopened in 2016 to include food and drink service from the adjoining Harbor Burger Bar. Today, the Harbor Square Theater is only movie theater still operating on the South Jersey coast. 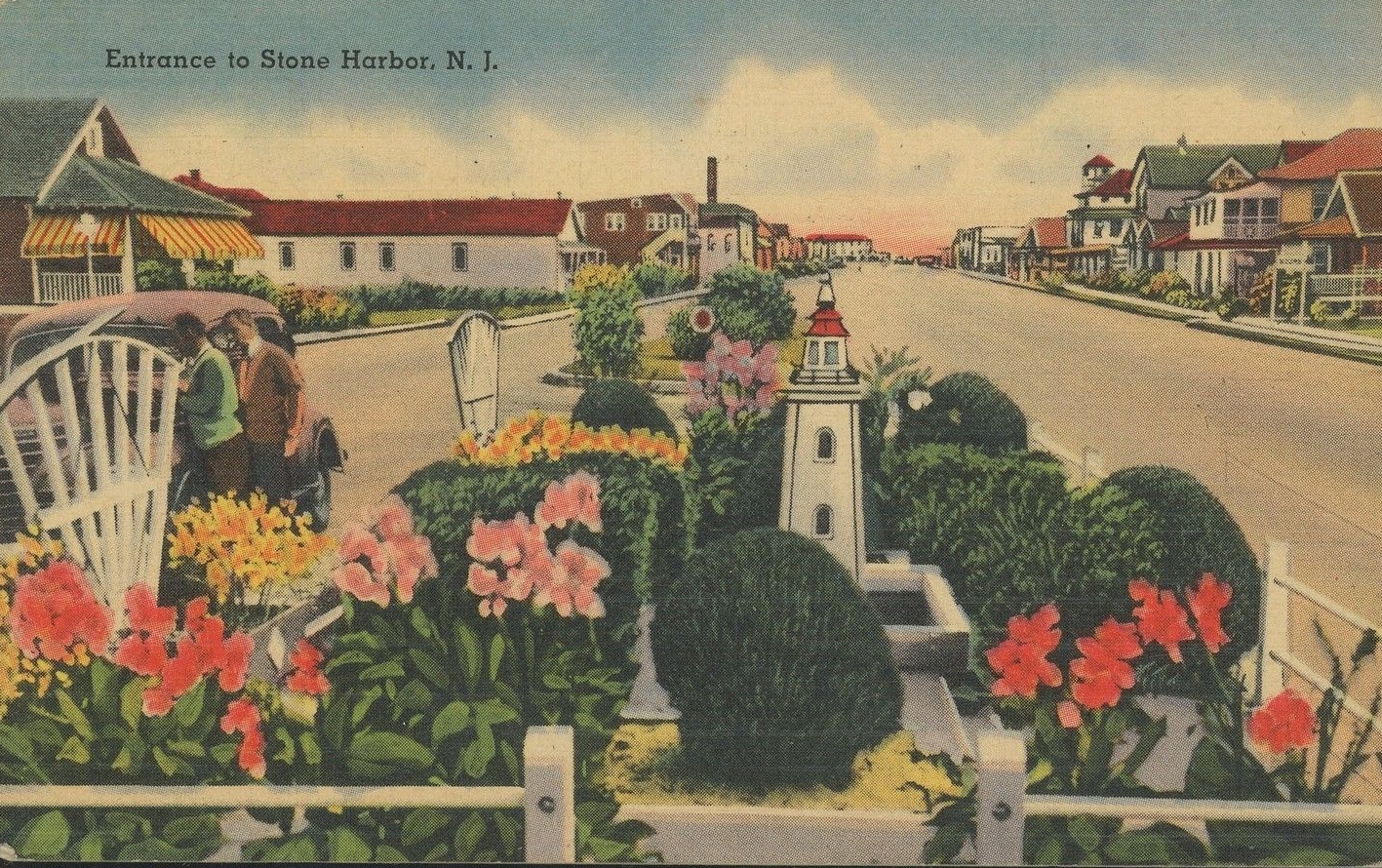 Throughout the years, 96th Street in Stone Harbor has developed into a popular, quaint shopping district with unique shops, boutiques and restaurants. In 2013 the luxury resort, The Reeds at Shelter Haven, opened at the corner of 96th Street and Third Avenue to provide upscale accommodations to overnight guests. With several restaurants and a beautiful location overlooking the bay, Reeds has become a popular destination for wedding parties and relaxing getaway weekends. It was built at the same location as the original Shelter Haven hotel operated for decades as a popular vacation destination. 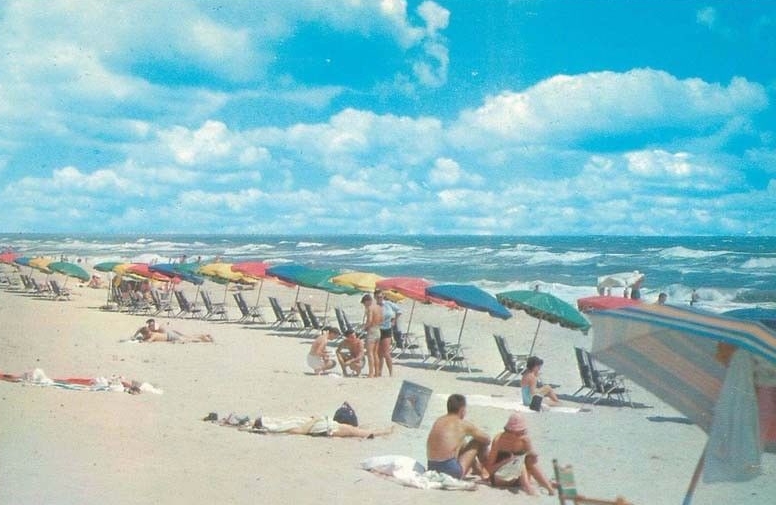 With beautiful beaches, various overnight lodging options, a popular shopping district and an active waterfront, Stone Harbor has become what its original planners hoped it would – the seashore at its finest.

Do you, or does your family or business, have a history in Stone Harbor? We’re interested in hearing from people whose families were original or early settlers, or who own or owned a business, or who have other historical information to share such as living or working here in past summers, meeting your significant others, getting engaged or married here or any other human interest story. If so, and if you would like to share your story, please contact us by clicking here. The information you provide us is  through this link is confidential and we will contact you to gain more information, as well as your full permission, before we disclose any information you provide.  Thank you, and please don’t hesitate to contact us!  (Note: for your privacy, do not include your information in the Leave A Reply box below unless you wish others to see your information).

To learn more Stone Harbor, please follow the links below:

Back to Stone Harbor’s Main Page 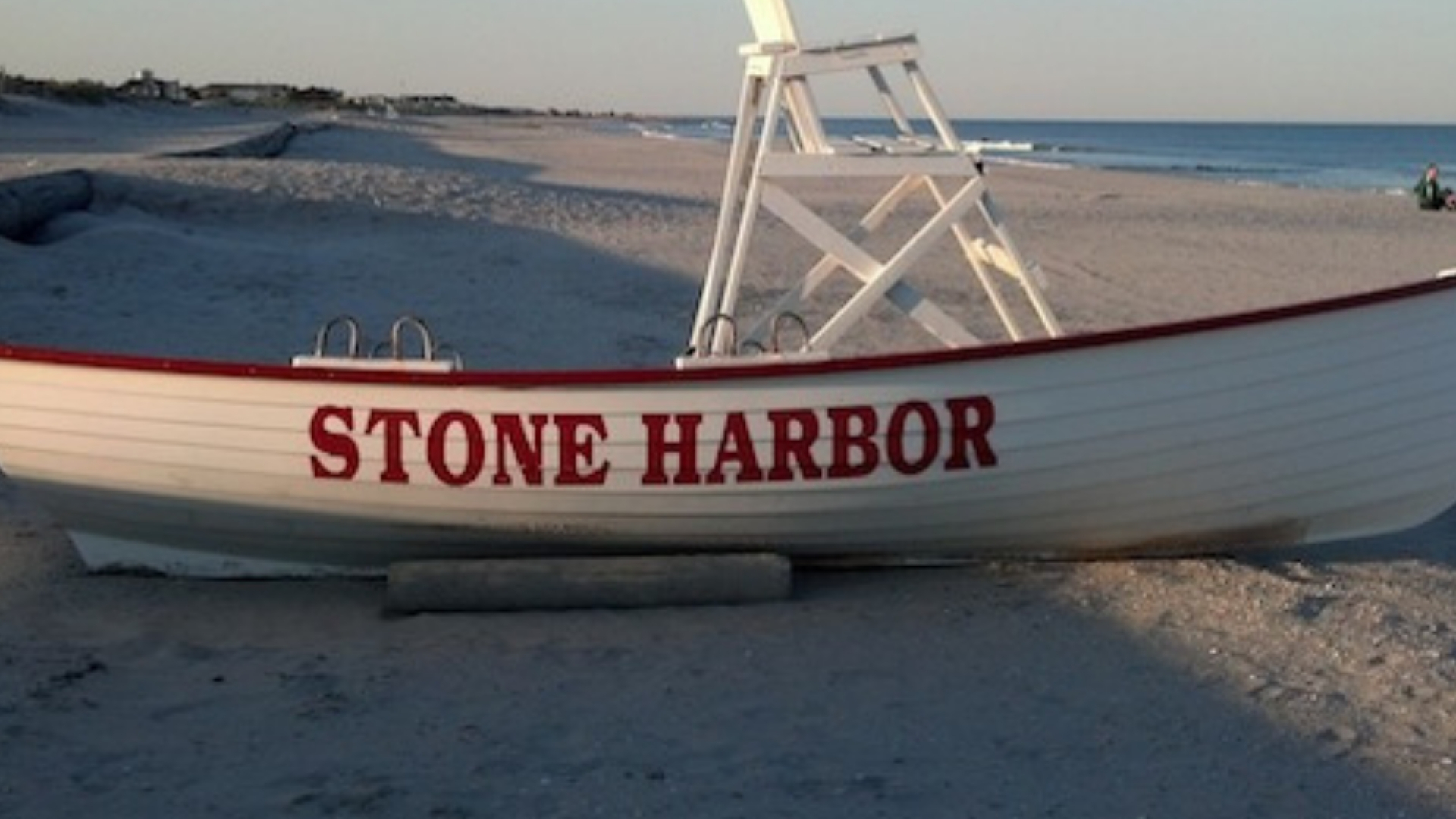 Where to Eat in Stone Harbor

Where to Stay in Stone Harbor 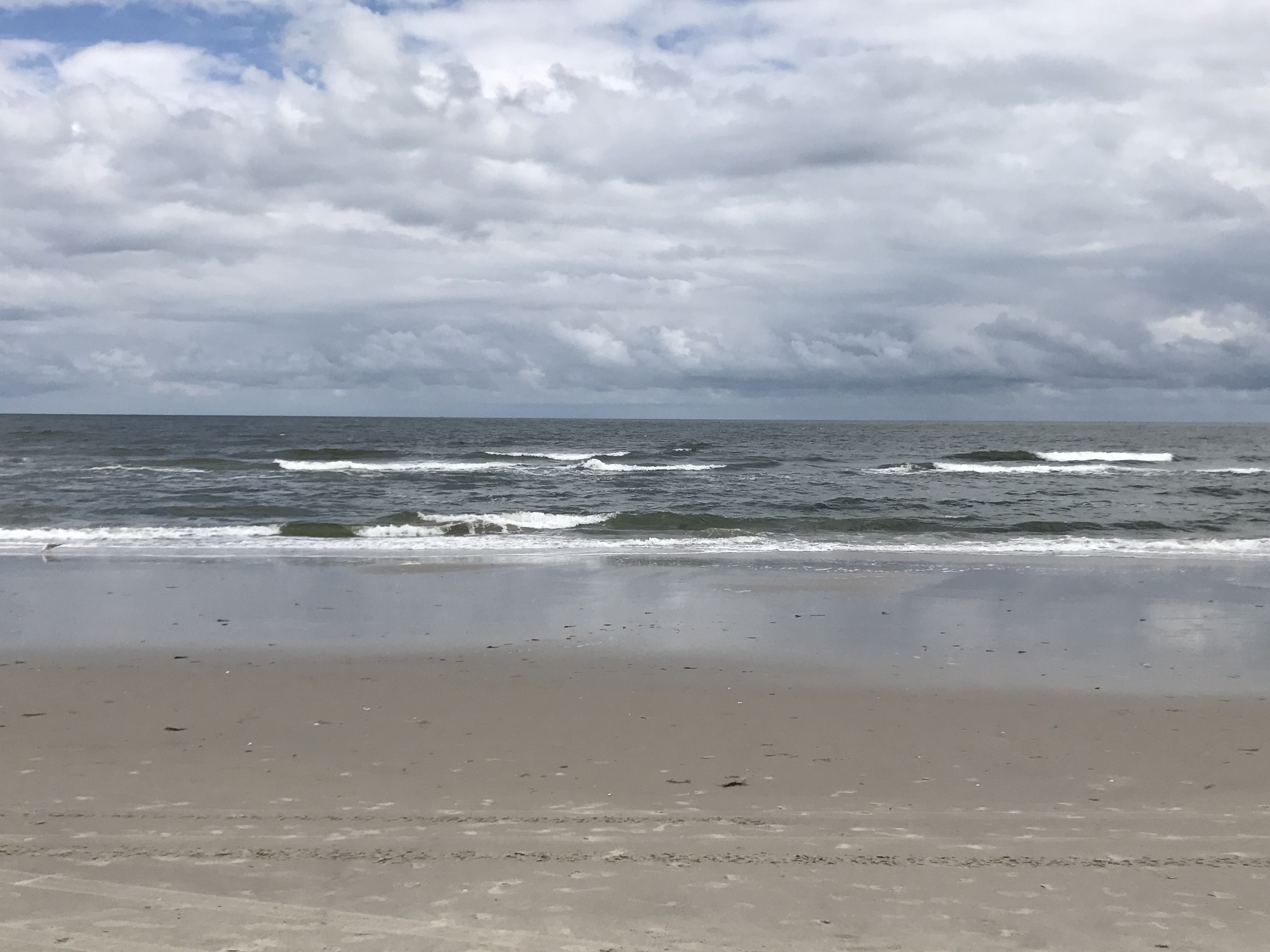 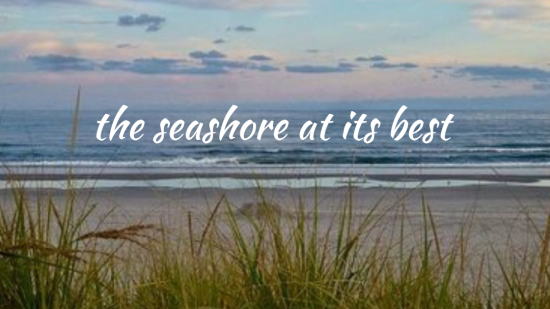 Stone Harbor – The Seashore at its Best

One thought on “History of Stone Harbor”