History of The Wildwoods 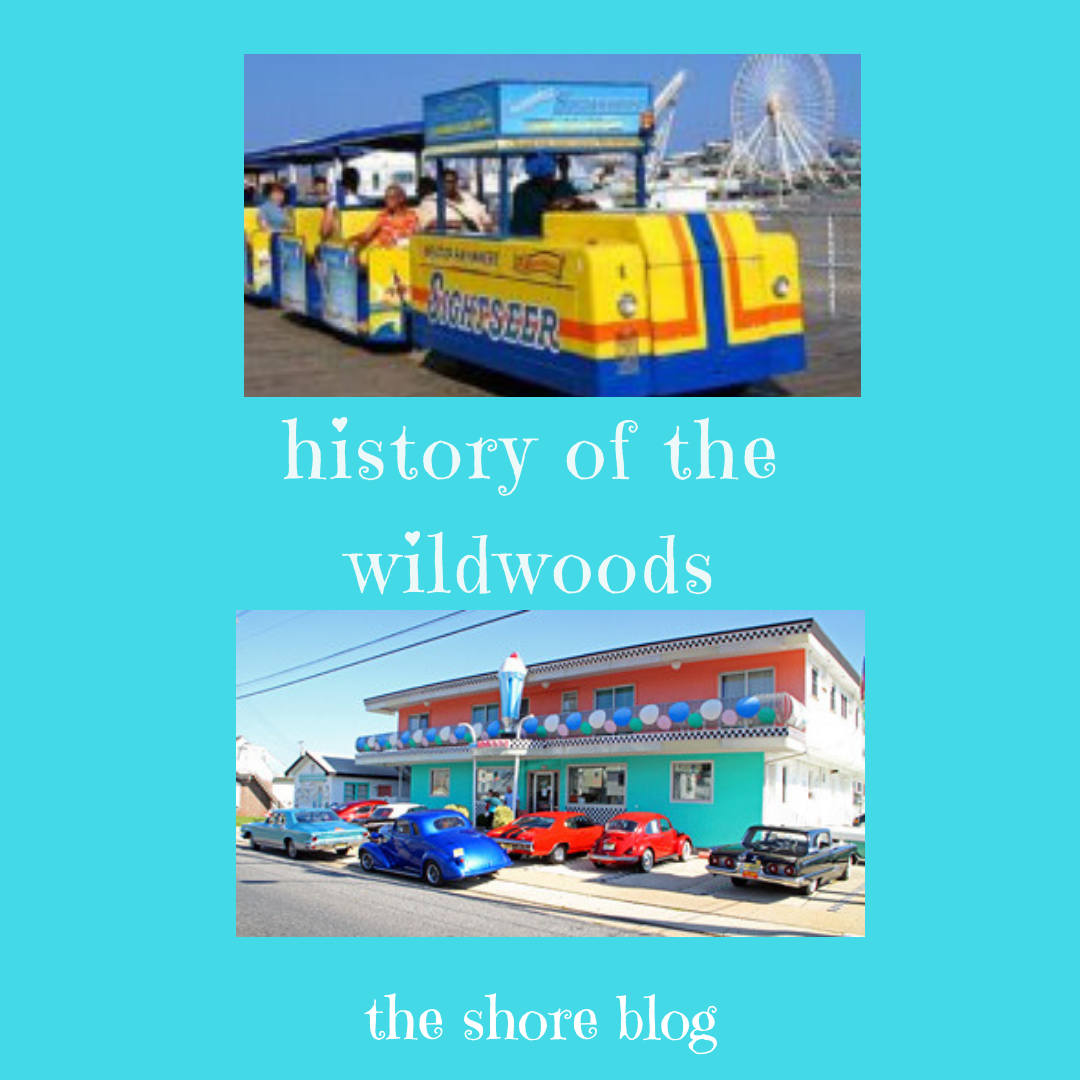 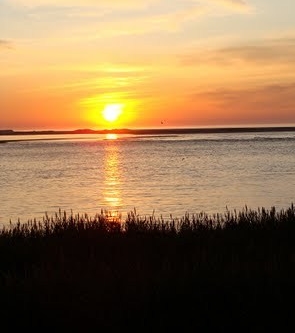 The history of The Wildwoods is interesting. Lenni-Lenape Indians came to the barrier island for decades to fish and hunt.  They cut trails through the mainland’s coastal forest and navigated through swamp lands to lead them to the island. In 1717, a group of investors acquired the island and for over a century it was used for farming, cattle grazing and fishing.

The Hereford Inlet hugs the northern end of the island where it meets the Atlantic. This was the location of many shipwrecks and groundings as the result of strong currents and shifting sandbars at its entrance. The U.S. Lifesaving Service constructed a life-saving station on the northern tip of the island in 1848. It was constructed near the inlet to assist boaters in distress. The station was one of 45 built along the New Jersey coast at that time. 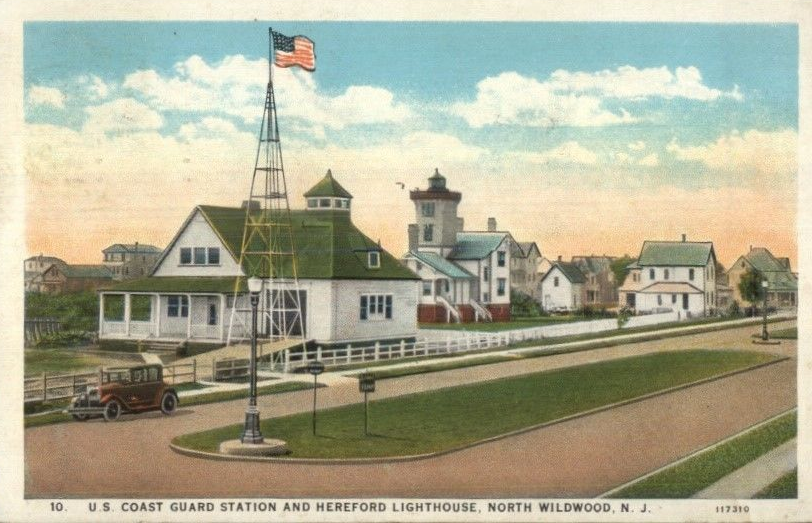 The Hereford Inlet Lighthouse was built in 1874 to further prevent vessels from running aground. It operated as a lighthouse until 1964. In that year, a tower was built on the property. It was built to accommodate a rotating modern optic and the building was closed. In 1986, after renovations, a portion of the building reopened. The light was moved back into the lighthouse lantern room and the building was once again operational. It continues to be a navigational aid today. Its beacon can be seen 13 nautical miles at sea on a clear night. The building now also houses a museum and gift shop. It is listed on the National Registers of Historic Places. 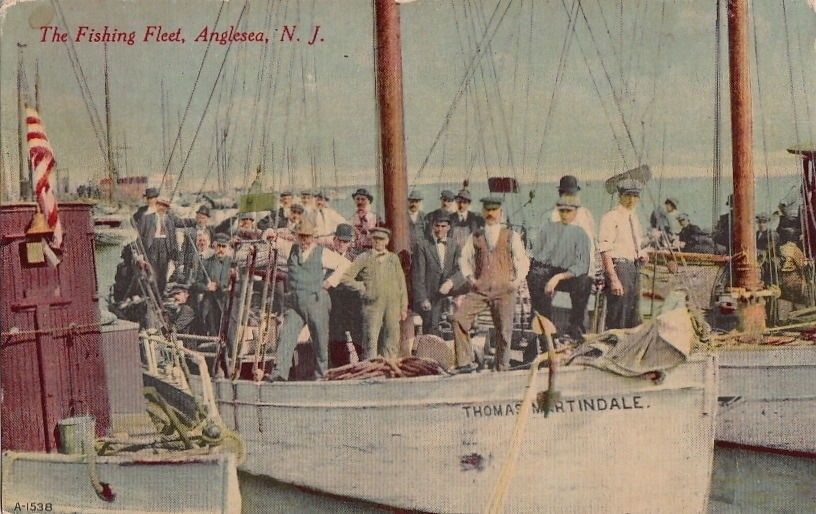 Fishermen and their families began building small houses on the north end of the island in the mid- to late 1800s. They became the island’s first permanent residents. The residents named the small community they built “Anglesea”. This would later become North Wildwood.

An entrepreneur named Frederick Swope purchased land on Five Mile Island in 1879 as a real estate venture. Three years later he formed the Anglesea Improvement Company. He began selling lots to investors and building summer cottages for wealthy Philadelphia families. In order to get people to the island, he built a railway spur. The spur connected Anglesea to the main West Jersey railroad line. This is the line that ran from Cape May. The train, whose tracks rested on wetlands, gained the nickname “Mud Hen”. This is because it often became derailed at high tide. When this happened, passengers had to disembark and stand in the marshes until low tide when the train could be corrected. 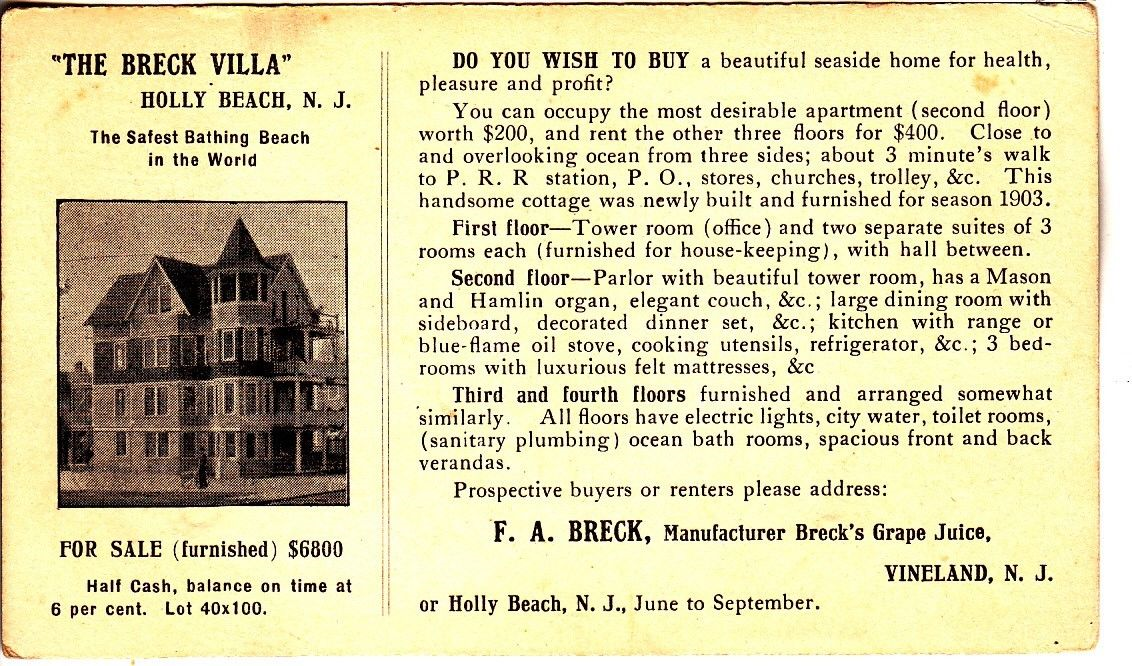 Three years after Swope came to town, a trio of men ventured to the middle of Five Mile Island to seek land for their own seaside homes. Finding a forest of wildly growing Holly trees, they formed the Holly Beach Improvement Company. They thereafter began developing the land. 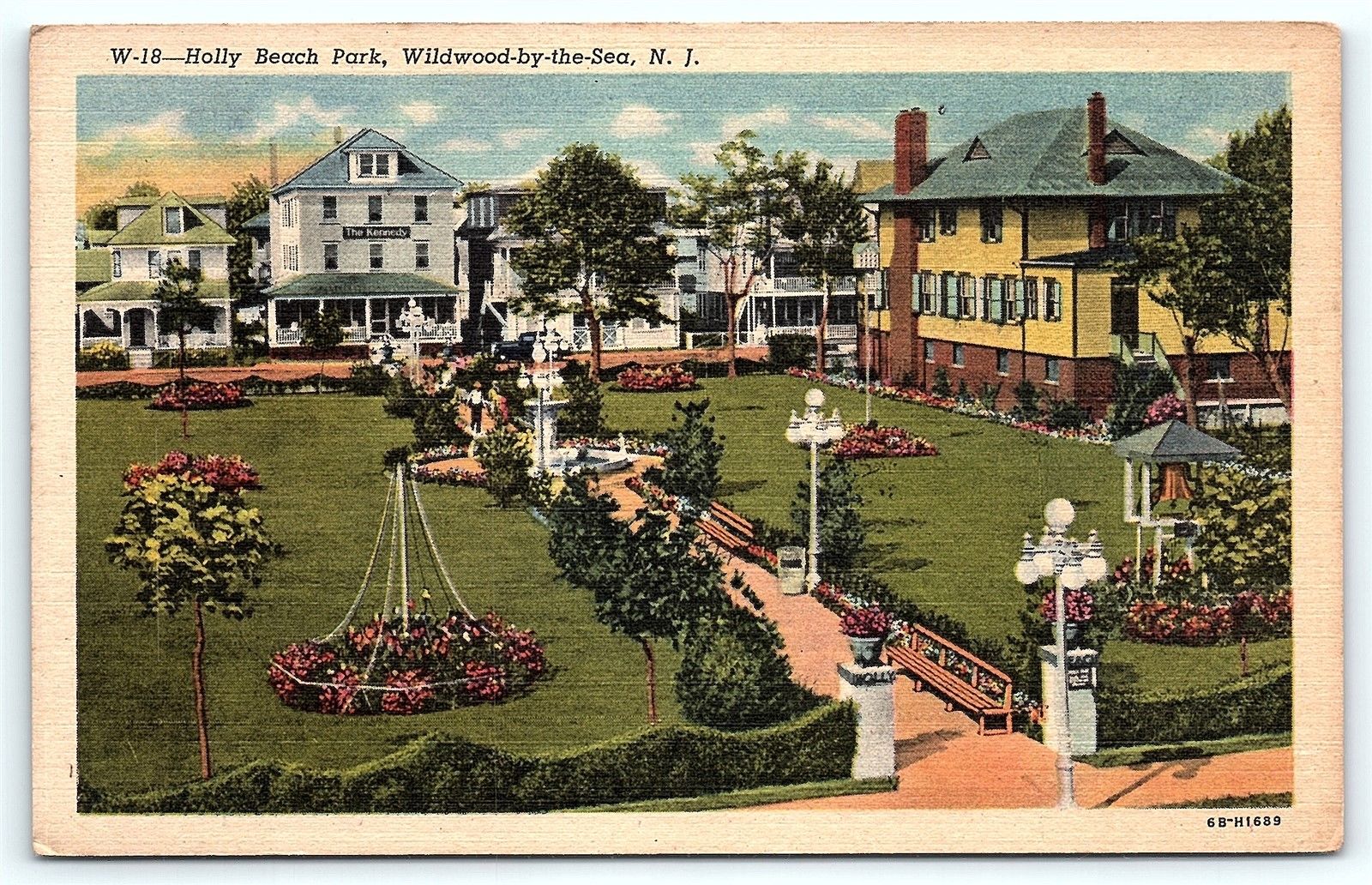 Latimus Baker, the company’s owner, brought his brother to the island in 1883 to 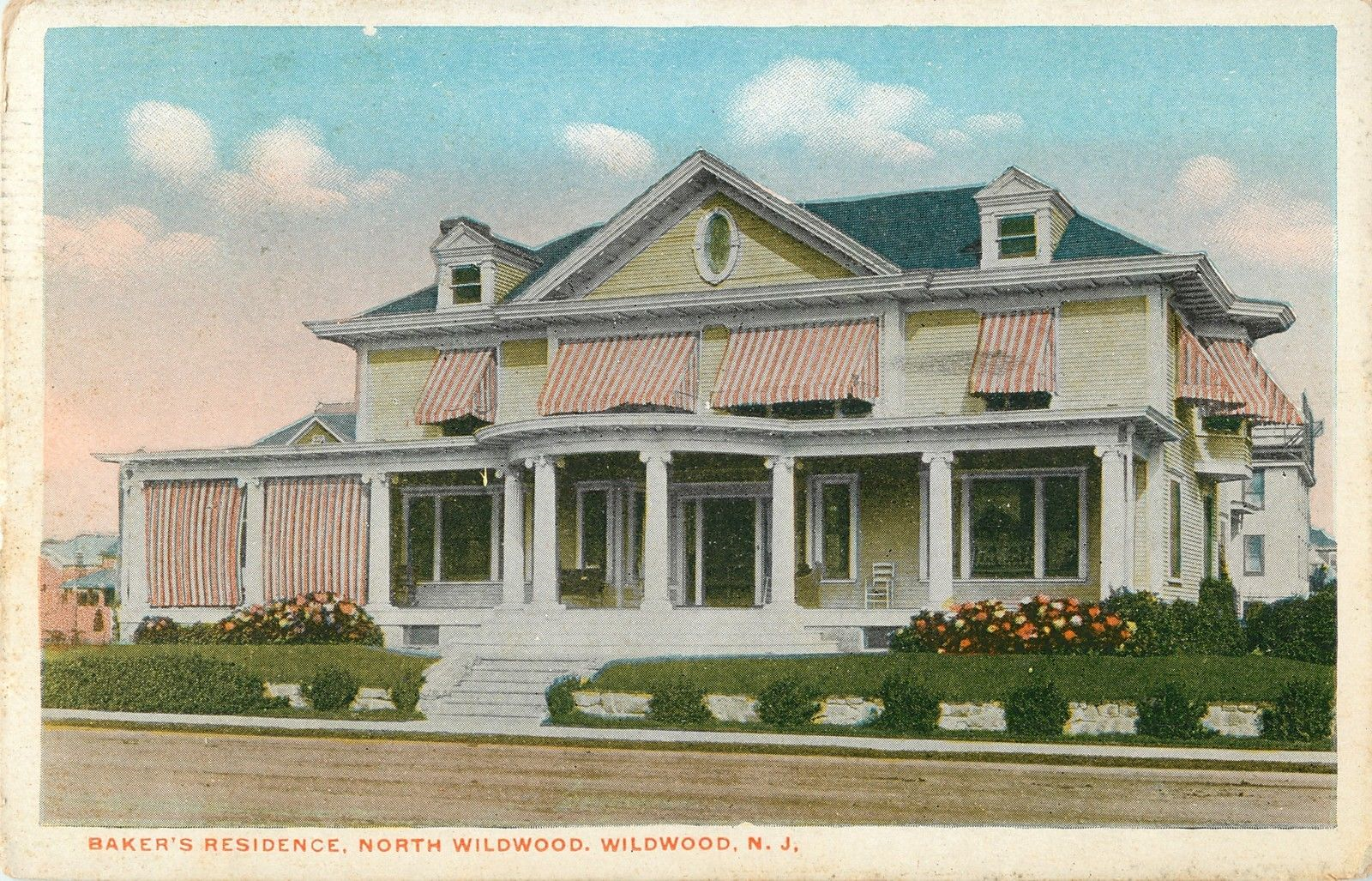 further explore development possibilities. They found a wild jungle of trees and vines to the north of Holly Beach. They purchased a tract of 100 acres and established the Wild-wood Improvement Company.

Development in Wildwood and Holly Beach was challenging. This is because transportation options at the time were sparse. People were forced to use a variety of modes to get there. This included trains, boats and walking paths and often all three. Construction materials were brought in by flat bottom boats. Fortunately, transportation challenges did not thwart development. Lots were sold and financed for payments of $10.00 a month. Many beach cottages and boarding houses were soon built. 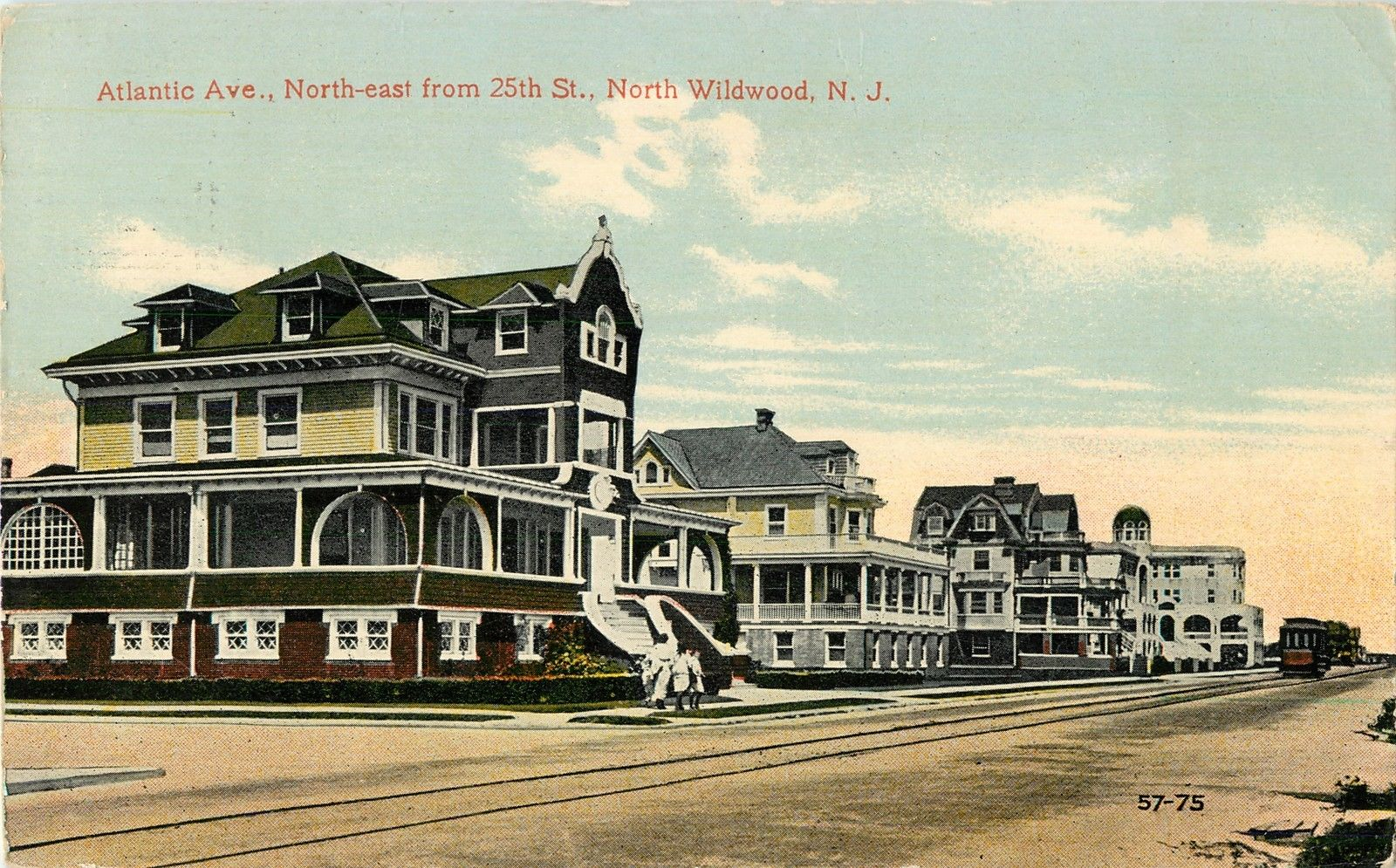 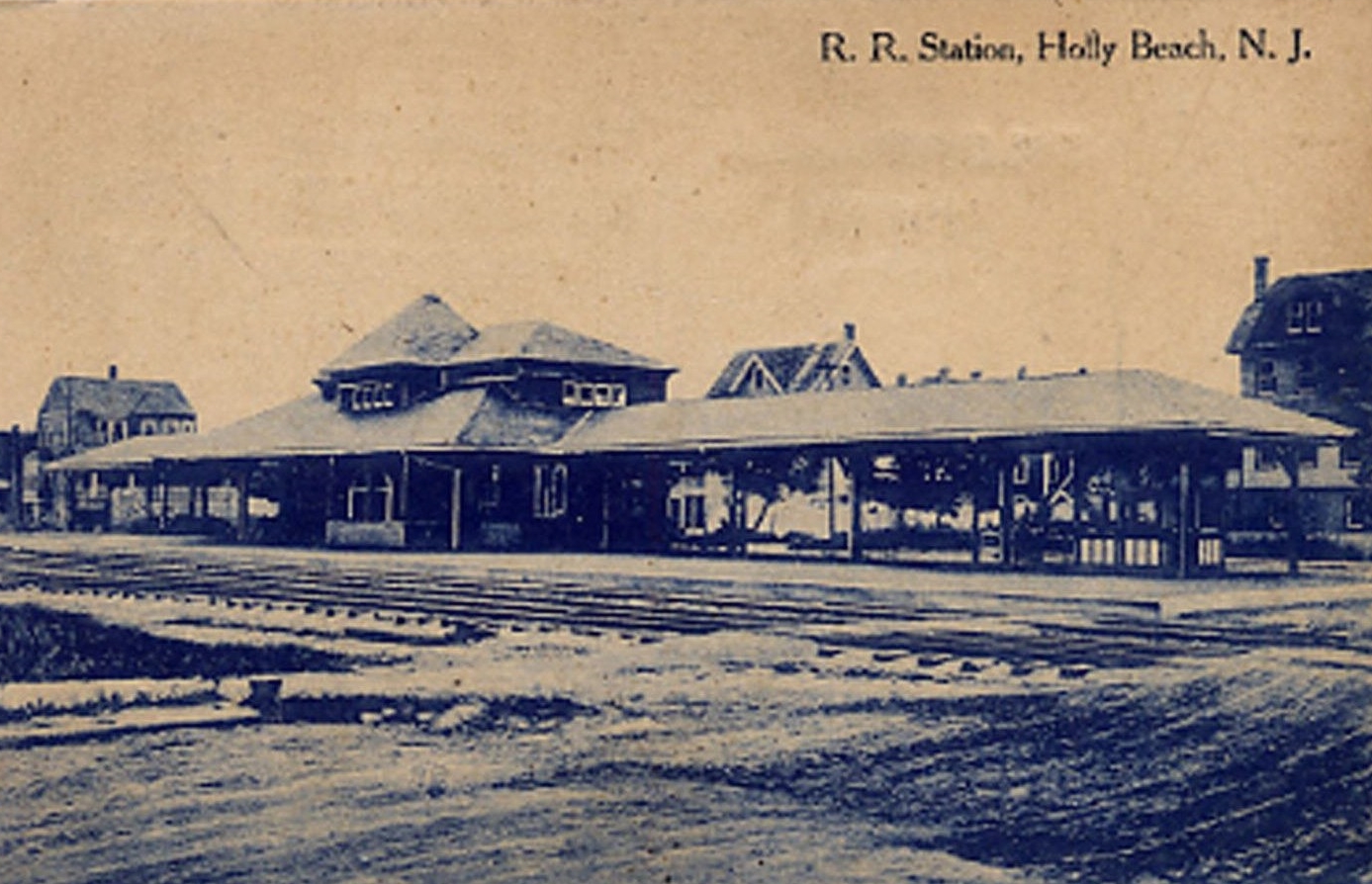 The railroad system eventually improved and by 1903 passengers were able to connect from Philadelphia, Cape May and other South Jersey towns. They rode to Anglesea and switched to a train that would travel to Wildwood and Holly Beach. Ferries were used to shuttled passengers across the harbor from Rio Grande Avenue. A bridge was built in 1903 across the inlet at Rio Grande Avenue. 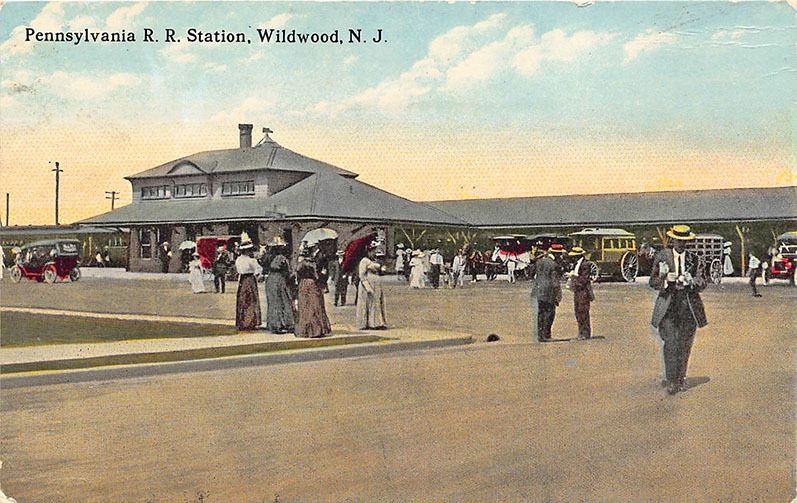 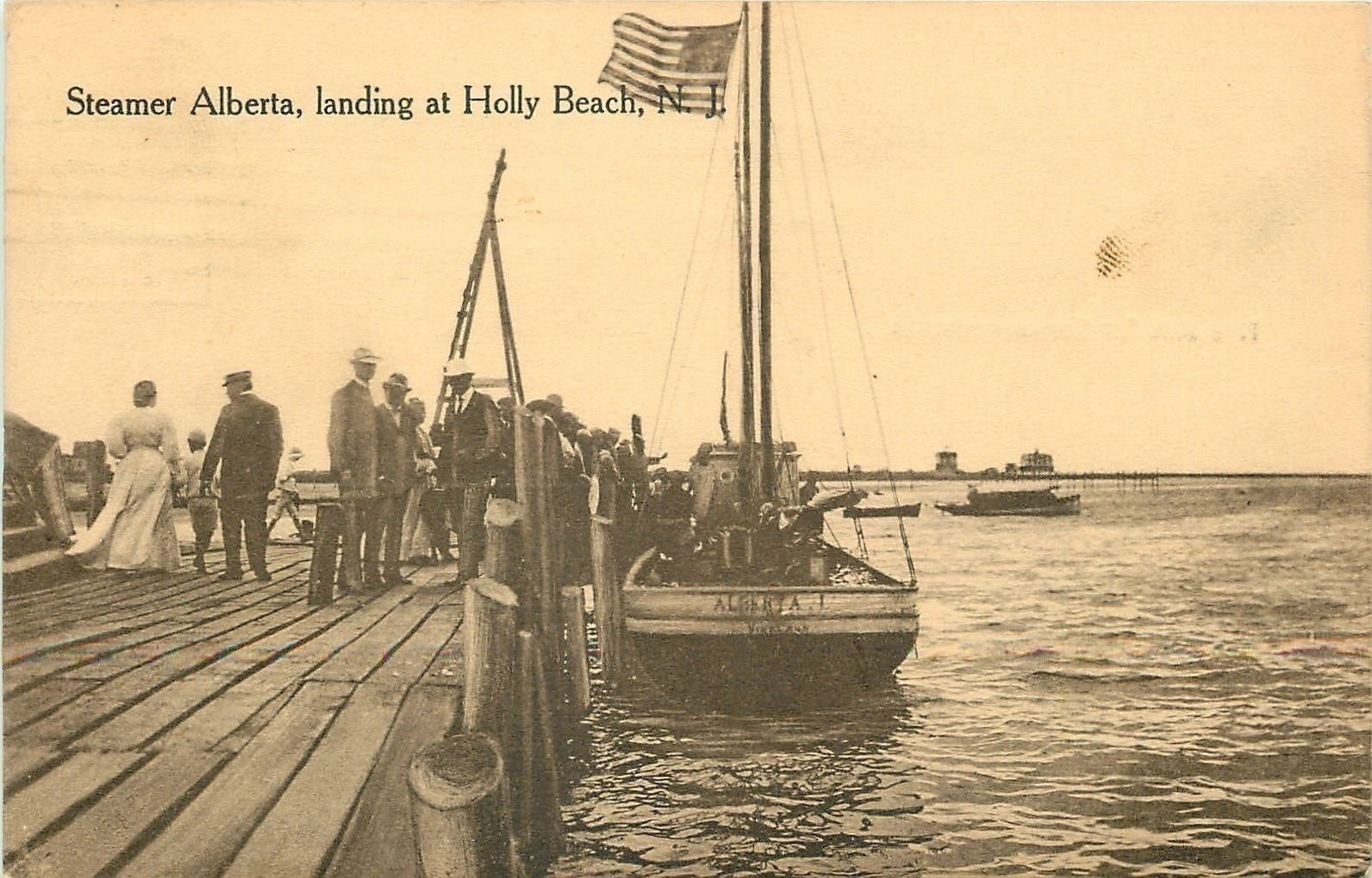 The Baker Brothers continued developing the southern end of the island. The first homes were built in 1906 in the area now known as Wildwood Crest. A dramatic arch was built the following year at Cresse and Pacific Avenues. The arch marked the beginning of the new community. 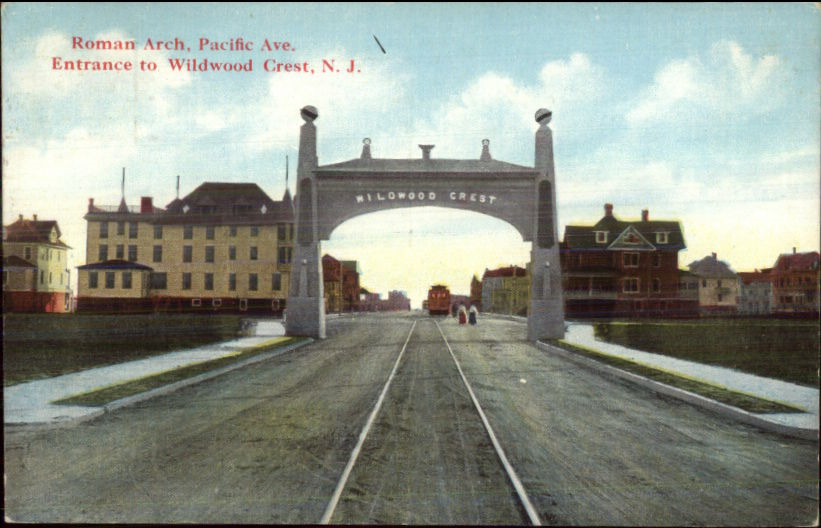 Wildwood communities’ classification and governing structure transformed dramatically between 1885 and 1920. Each community eventually became its own separate entity. Anglesea became incorporated as a borough in 1885. It was reincorporated in 1906 as the borough of North Wildwood. North Wildwood became a city in 1917. Holly Beach was incorporated as a borough in 1885. Wildwood became a borough ten years later. In 1912 Wildwood and Holly City were joined as one entity. The two entities became Wildwood City. 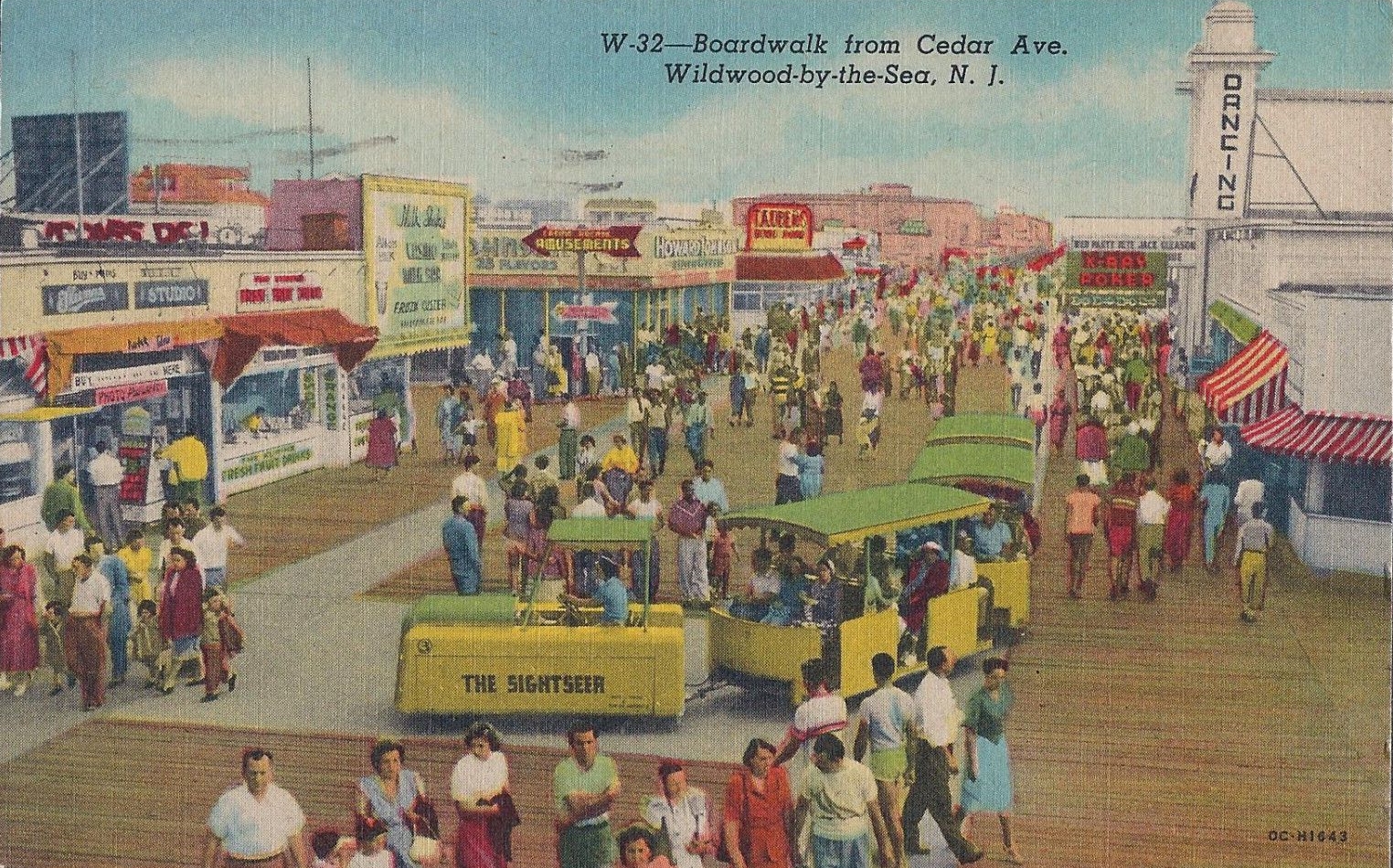 The Wildwood Boardwalk is one of the greatest attractions of the South Jersey shore. Several small boardwalks were constructed in Anglesea, Holly Beach, North Wildwood and Wildwood Crest in the early days of development. The only purpose of these boardwalks was to connect hotels, guesthouses and businesses. 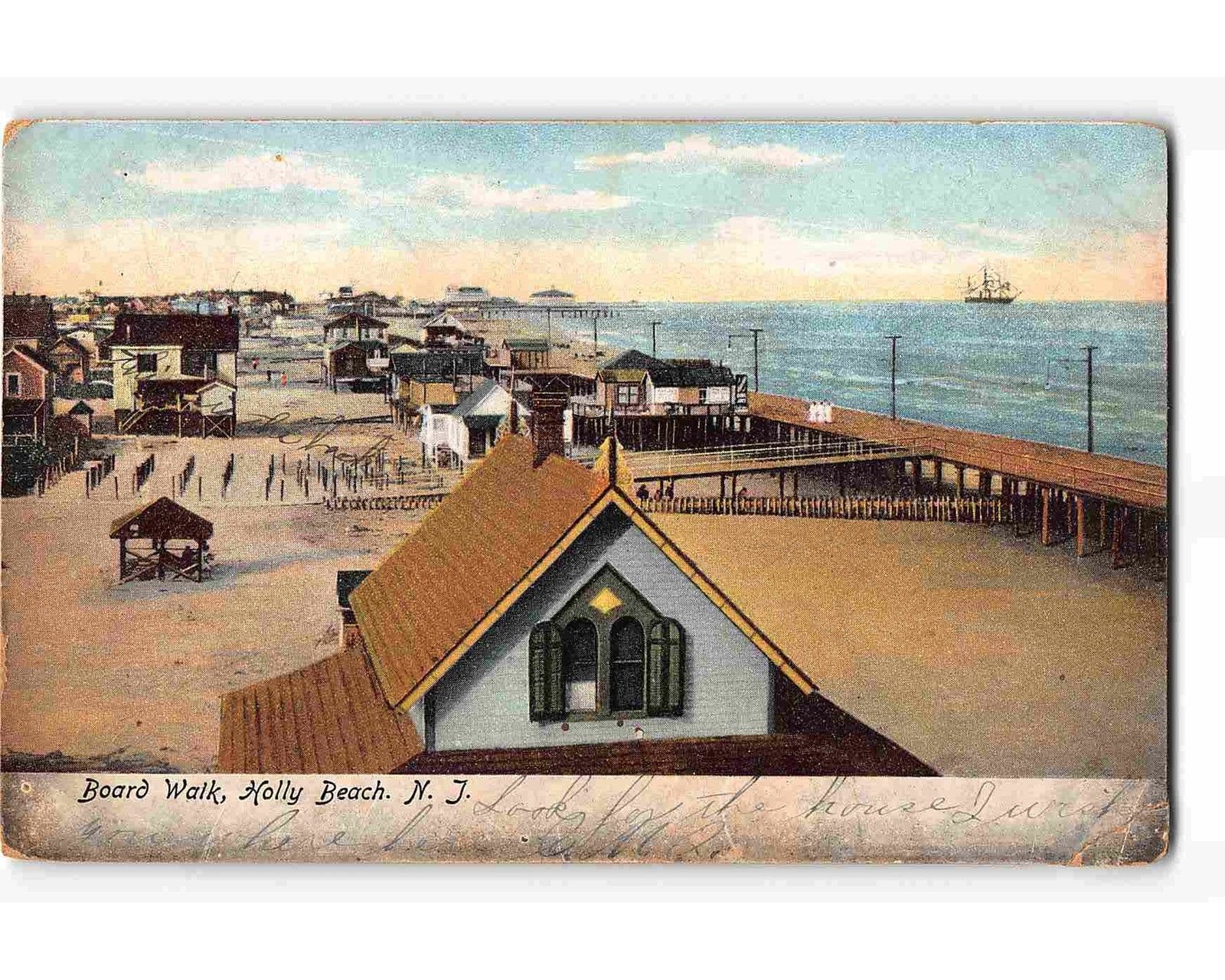 The boards were rudimentarily placed and often rested on the sand. In the 20th century, the boardwalk was expanded to stretch from North Wildwood to the beginning of Wildwood Crest. It was elevated above the sand and situated closer to the ocean, unlike the earliest boardwalks.

As the boardwalk expanded, many amusement rides, dining establishments and bandstands soon appeared. 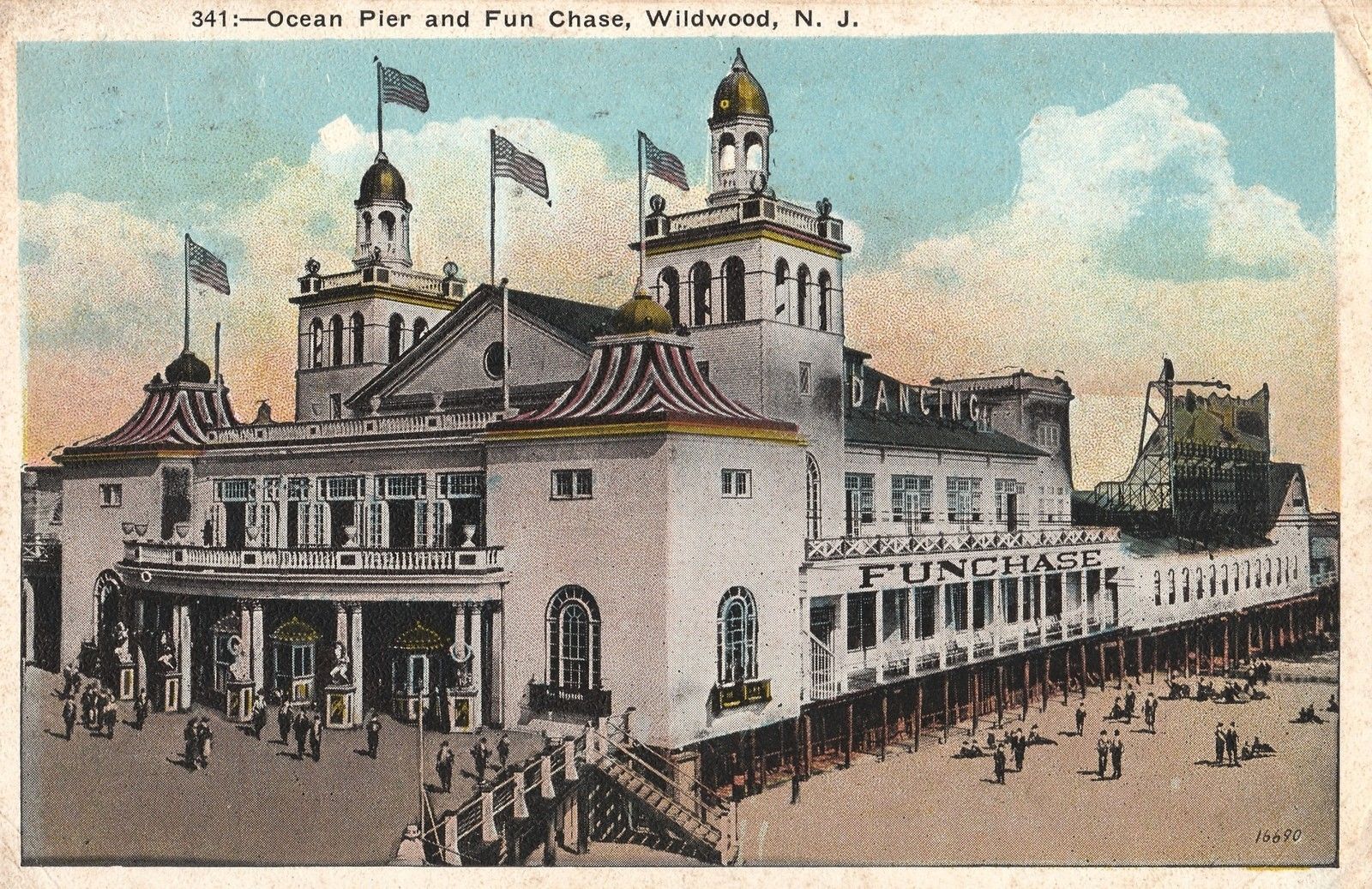 Ocean Pier began in the early 1900s and at first was home to dances and musical acts, later becoming an amusement park. Another popular pier at the time was Blaker’s Pier, which stood at the location of the original Excursion House at Cedar Street and the beach. Blaker is credited for introducing rolling wicker chairs to the Wildwood boardwalk in 1906.

Over the next few years, the boardwalk became victim to the forces of nature and fell into disrepair. Additionally, Wildwood’s beaches were expanding at a rapid rate due to the construction of Cape May’s harbor and jetties, and later the inlet at Wildwood Crest, all of which changed the natural flow of eroded sand and forced it to build up on Wildwood’s beaches. This meant that the boardwalk, once next to the ocean’s edge, was becoming further away from the water.

One night in 1919, after a town official unsuccessfully argued to move the boardwalk closer to the ocean, he arranged for its clandestine destruction at midnight so that the town would be forced to rebuild it in accordance with his suggestion. The town was dismayed over losing its boardwalk unexpectedly, but the plan was successful – in 1921 it was rebuilt closer to the ocean. Today, as beaches continue expanding, the boardwalk is very far from the ocean in many areas, compared to the boardwalks of Ocean and Atlantic Cities that lie very close to water’s edge. This may be one reason why Wildwood’s boardwalk has not endured weather-related damage to the extent that its northern neighbors have.

The Garden State Parkway was completed in 1955. It connected Wildwood and other South Jersey beach towns with the mainland and the state to the north. The Parkway allowed more travelers to visit the island. A building boom began in the 1950s. Over 200 motels were constructed in the Wildwood communities during this decade. They were built with unique architecture and flashing neon signs. The buildings were designed to attract motorists to stay. Many hotels displayed themes such as space age, tropical, and other eye-catching gimmicks.

But perhaps the other reason for growth in popularity as a vacation destination was the legacy that Wildwood was developing as the “Las Vegas of the East”. In the 50s and 60s, many famous artists came to Wildwood to perform their hits, spurred on by promotion managers that promised them huge crowds. It is said that the1954 hit “Rock Around the Clock” was first performed by Bill Haley & His Comets at the HofBrau Hotel in Wildwood. Known as one of the first rock and roll hits, the fact that it was first performed in Wildwood inspired the city to claim itself as being the birthplace of rock and roll. Other famous artists that performed in various venues throughout the Wildwoods are Chubby Checker, Fats Domino, Bobby Rydell and Diana Ross.

The first national broadcast of Dick Clark’s American Bandstand occurred in the Starlight Room on the Wildwood Boardwalk. “Doo Wop”, the name coined for the genre of mid-century music featuring non-sensical or “doo wop” type sounds, was a popular sound often heard wafting from clubs on this island by the sea.

The Morey family purchased two lots on the boardwalk in North Wildwood at 25th and 26th streets in 1969. They renovated the Surfside Pier to feature new and improved amusement rides. Their business expanded over the next several decades. The Morey family owned the boardwalk’s three ride piers and two water parks by the end of the 20th century. Today, Morey’s Piers are the primary attraction of the Wildwood Boardwalk.

The tram car has been the most iconic symbol of the Wildwood boardwalk.  Its pre-recorded warning message, “Watch the tram car, please!” is a favorite boardwalk catchphrase. Tram cars are trackless “trains” that have been running the length of the Wildwood boardwalk since 1949. They run from 16th Street in North Wildwood to Cresse Avenue in Wildwood Crest. Each year, tram cars shuttle millions of visitors to various places along the boardwalk. They run on batteries that are charged each night. Some of the cars still used today were originally built for the 1939 World’s Fair in New York. 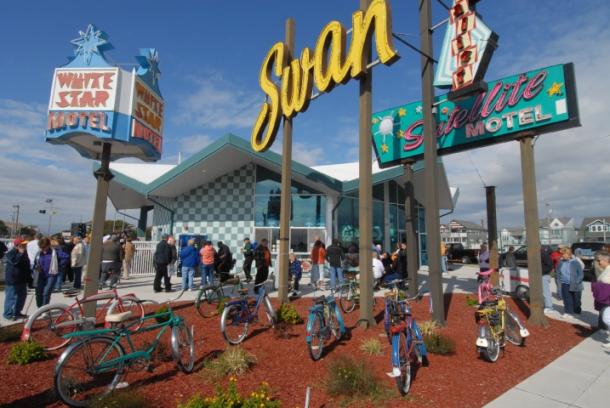 A university study concluded in 1997 that Wildwood had the largest collection of mid-century commercial architecture in the nation. Therefore, the Doo Wop Preservation League was formed. The League is comprised of Wildwood business owners and community members. Its mission is to preserve the 1950s era diners and motels that made Wildwood the “Doo Wop Capital of the World”. 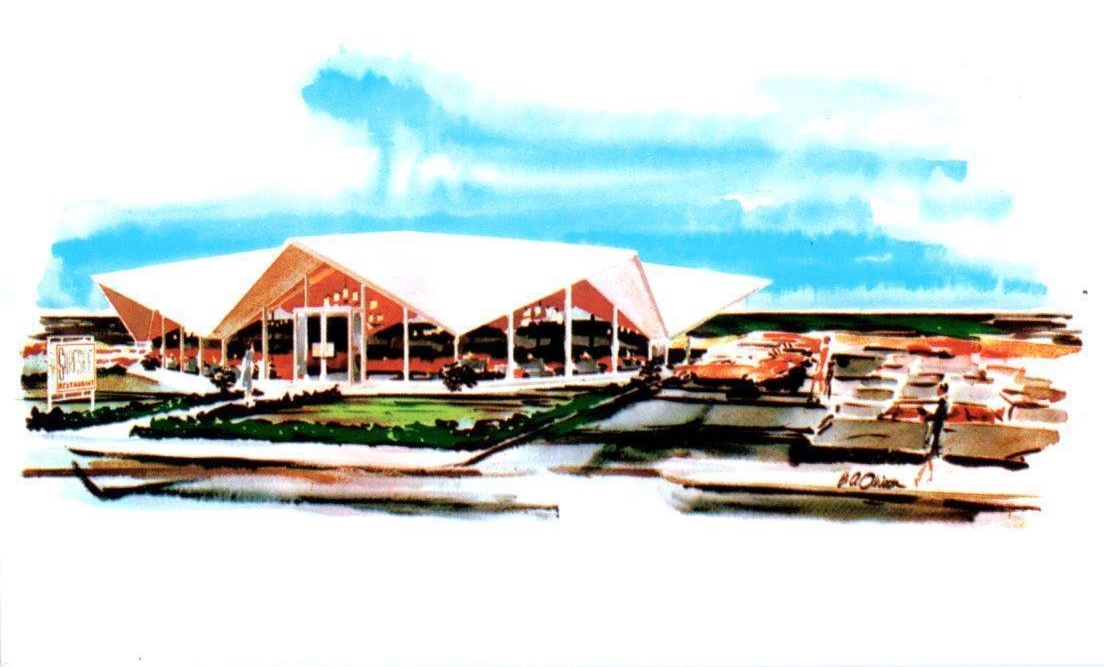 In 2002, the League and its partners raised funds to save an iconic 1960 restaurant called the “Surfside” from demolition. The restaurant was built in the traditional doo wop fashion with a space-age look. The money was used to disassemble the restaurant. Its pieces were stored until 2007 when it was resurrected on property across from the Wildwood Convention Center. It thereafter became the “Doo Wop Museum”.

The museum features a 50’s style bandshell, a retro malt shop, a neon sign garden, furniture, and other mid-century memorabilia. A Wawa Convenience Store and Acme Grocery Store are housed on the museum’s property. They are both purposely built in the 50’s style. Other preservation efforts resulted in two of Wildwood’s most iconic 50s hotels, the Caribbean Motel in Wildwood Crest and the Chateau Bleu Motel in North Wildwoods being listed on the National Register of Historic Places.

Over 9 million visitors travel to The Wildwoods each summer. They come to enjoy the expansive beaches, massive boardwalk and endless entertainment. These are the very things that have led The Wildwoods to become the recipients of numerous “best” awards over the years.

But if you listen beyond the shrieks of delighted children, you’ll hear the symphonic crashing of ocean waves. If you look beyond the flashy neon lights and throngs of vacationers, you’ll see a beautiful natural barrier island that, in some places, still looks as it did when its earliest residents settled in.

The Wildwood’s success as a treasured vacation destination is directly the result of these early pioneers – men and women who were willing to endure arduous travel conditions, challenging terrain, a shifting oceanfront and natural disasters so that future generations could enjoy the seaside amusement mecca it is today. 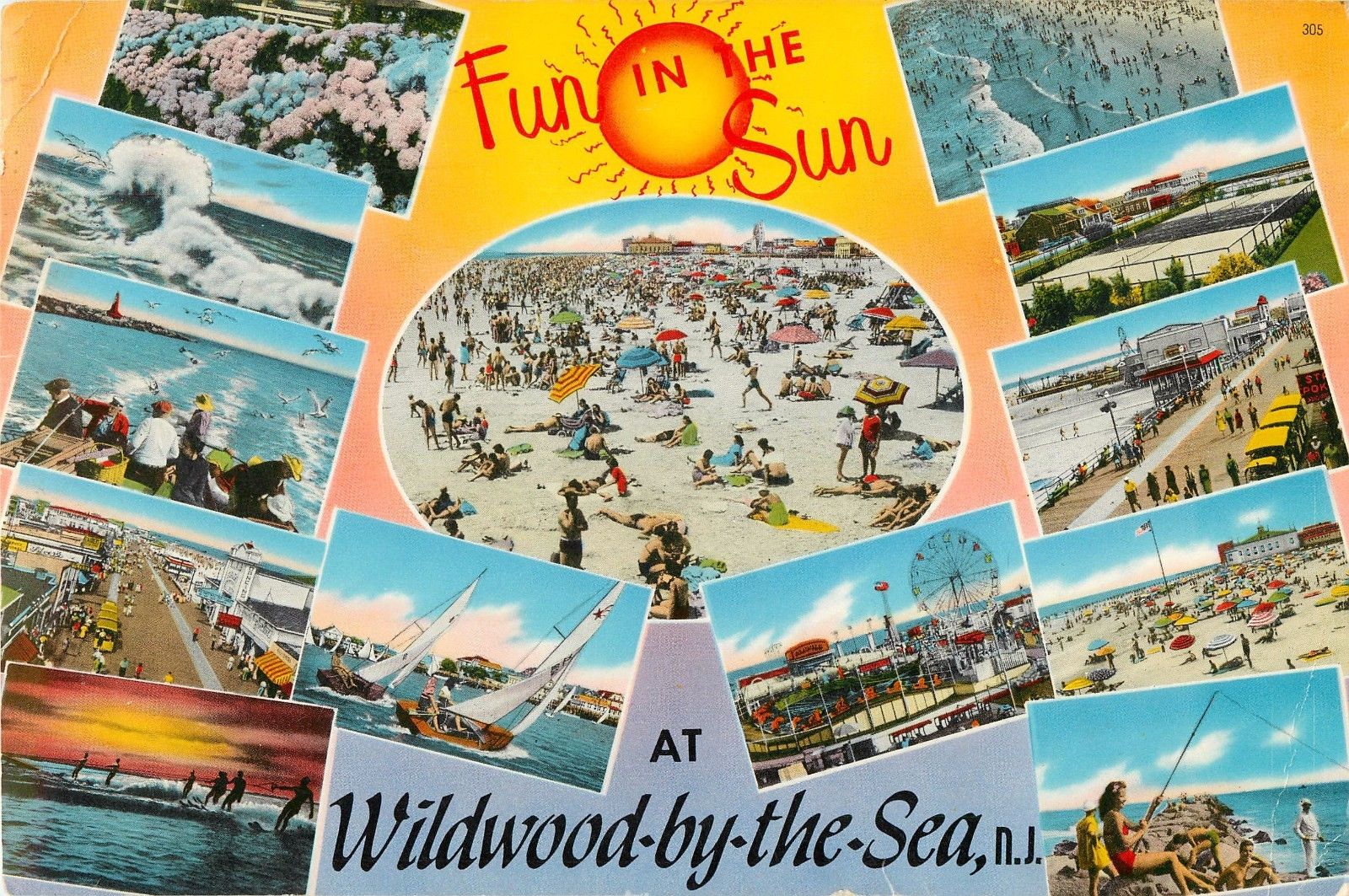 To learn more about The Wildwoods, please follow the links below:

Back to The Wildwoods’ Main Page 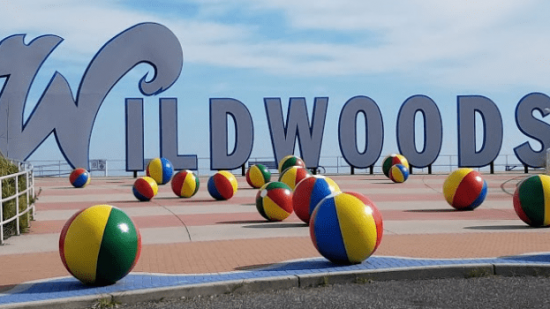 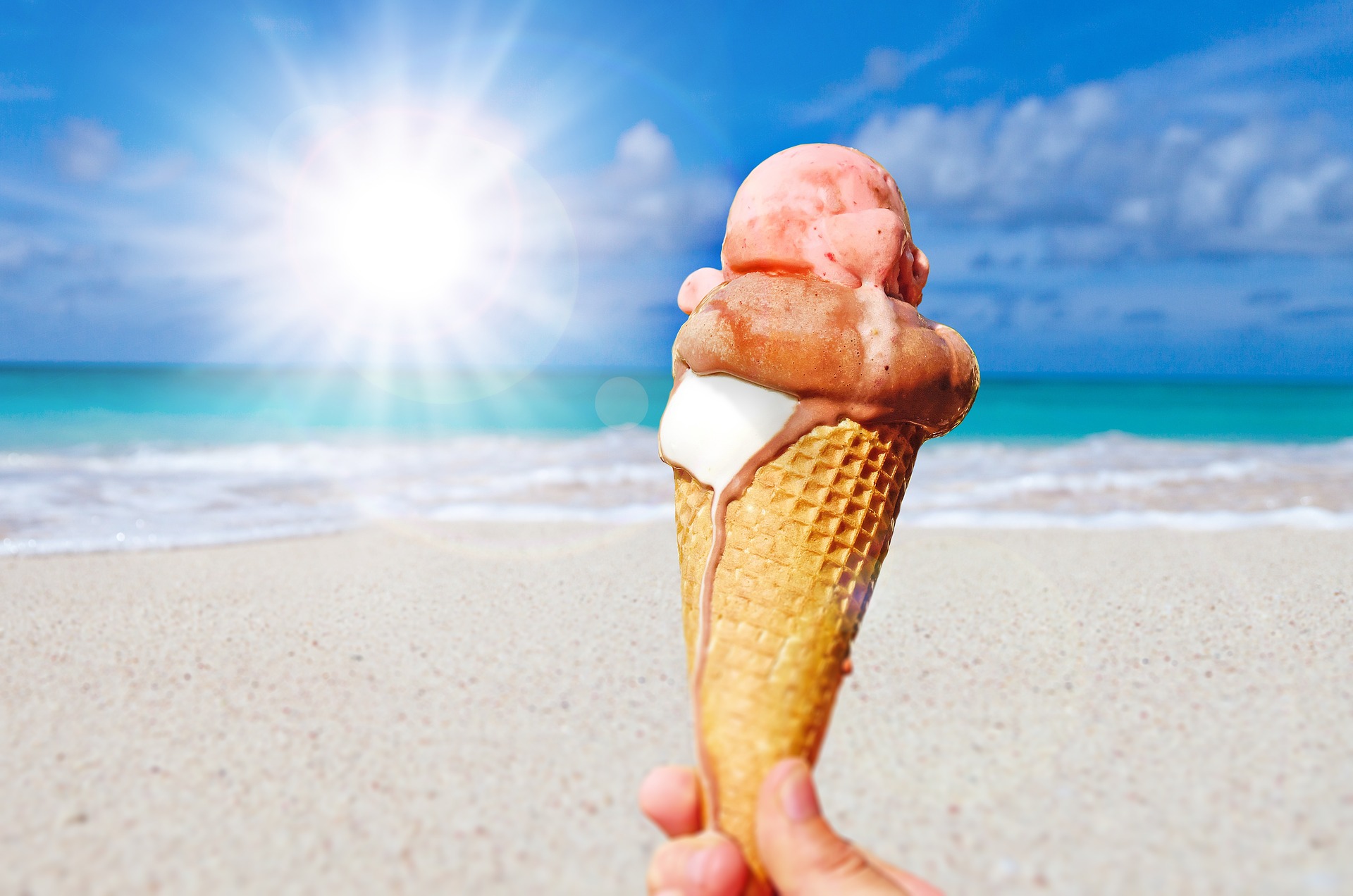 Where to Eat in The Wildwoods 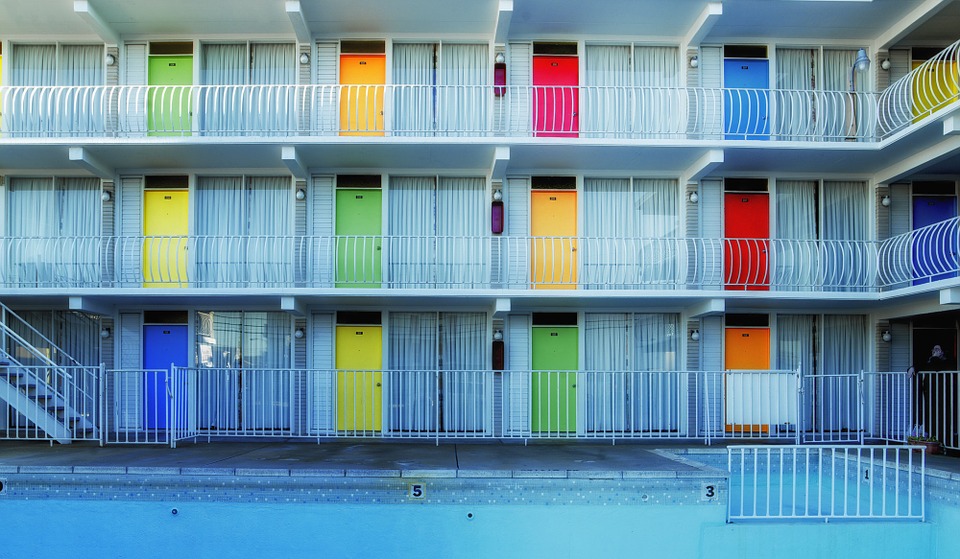 Where to Stay in The Wildwoods 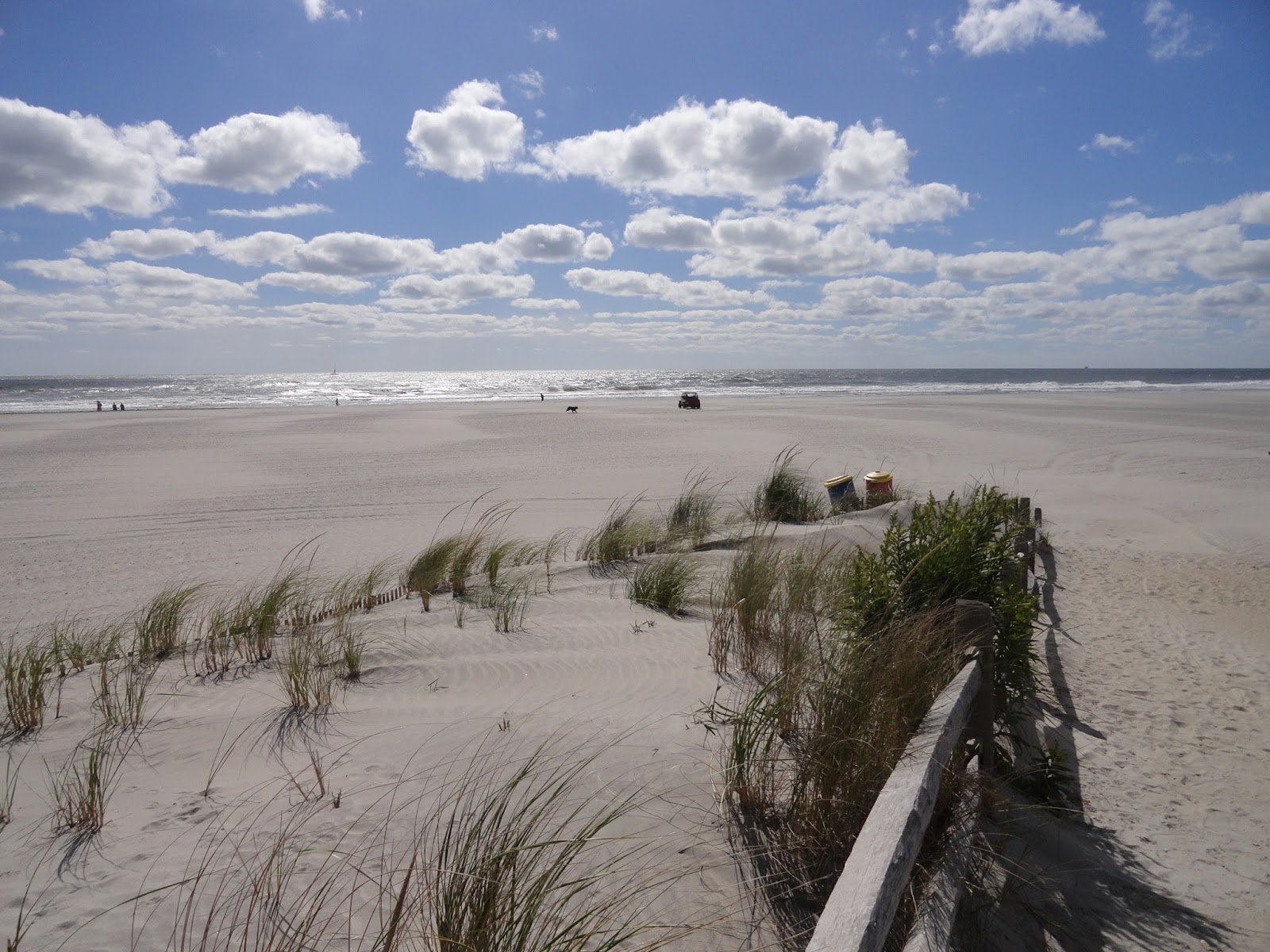 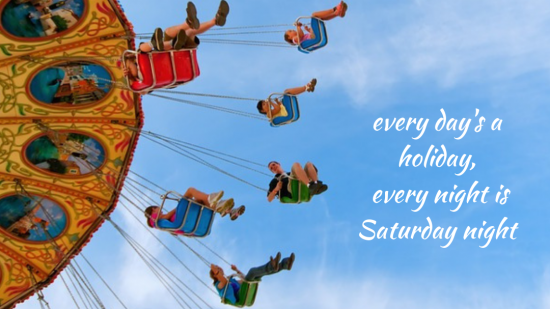